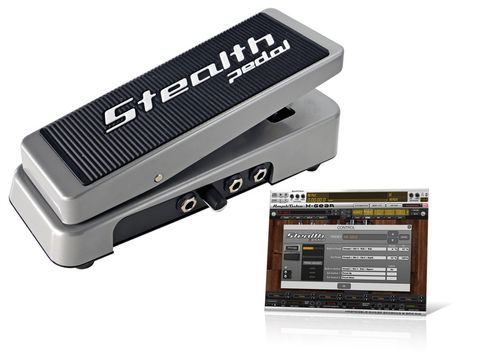 It has a few curious drawbacks, but the Stealth Pedal has it where it counts: solid build quality and great-sounding software.

IK Multimedia's AmpliTube is one of the best-known guitar amp simulation applications on the market, and IK has previously responded to users' interfacing needs with the budget StealthPlug and high-end StealthIO hardware.

Filling in the middle ground is the new USB-powered StealthPedal, which ships as standard with AmpliTube Live, Ampeg SVX UNO and AmpliTube X-Gear (£199), while the Deluxe bundle - reviewed here - features AmpliTube 2, Ampeg SVX and X-Gear. And for an indefinite period, both bundles come with AmpliTube Metal as a bonus download.

As for the hardware, connections run along both sides and include two inputs (instrument or line level), two line outs, a USB socket, a mini-jack for headphones, as well as two 1/4-inch jacks for a further expression pedal and a dual footswitch (not supplied).

The four main ins and outs are all capable of balanced operation, and there's also an output level knob and a switch that's activated by pressing down hard on the pedal (like the bypass on a real wah).

To use it with AmpliTube, you load up the X-Gear shell, select the Stealth Pedal as your audio interface and enable it as the control source via the front panel - patches that use a wah, volume or whammy pedal in the Stomps section are mapped automatically by default.

For custom control, there's a Setup panel where, for each patch, you can define which parameter maps to which control (and assign value ranges), and whether switches are latched.

To configure the StealthPedal as a standard MIDI device, you use the StealthPedal MIDI Control application. As with X-Gear, it enables you to map up to three switches and two pedals, but this time to MIDI CCs and Program Changes, not to mention MIDI notes for the switches and pitchbend for the pedals. You can save your mappings as presets and map the volume knob, too.

There's one limitation that's common to both the 'direct' X-Gear control and MIDI mode, which is that you can only assign one parameter per control - so you can't use the pedal to increase an AmpliTube's amp gain while turning down the reverb level, for example.

However, some competing amp sims (eg, Overloud TH1) have more advanced MIDI mapping abilities, and with these, you can indeed manipulate several parameters with one Stealth Pedal control, which makes X-Gear seem lacking in this area (an update is being considered, says IK).

The pedal is very solid in build (although the volume knob is positioned rather dangerously) and offers enough resistance to make for precise manipulation - it feels 'right'. Running X-Gear in standalone mode gave us glitch-free operation with a buffer size of 144 samples at 48kHz operation (6ms latency).

The sound quality is good, but annoyingly, there are no MME or WDM drivers for Windows, only ASIO. We also found the X-Gear plug-in RAM-hungry, gobbling up around 150MB per instance.

The price, of course, will be the main issue for most prospective buyers, as it ain't cheap, and while the included AmpliTube products add a lot of value, if you've already got them, or they're not the exact ones you want, you may feel like you're not getting your money's worth.

Listen to three examples of the StealthPedal in use: