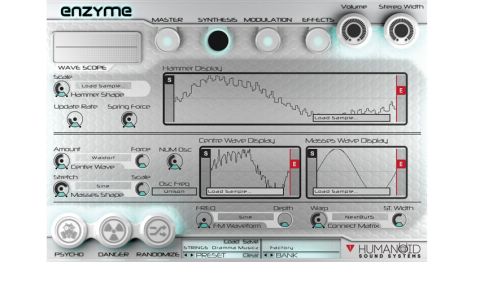 When Humanoid Sound Systems unleashed its debut Scanned Synth Pro, we were taken aback by its utter strangeness. Here was an instrument based on an obscure and underrepresented form of synthesis, and the sounds coming out of it were... well, almost too unfamiliar.

Now, the developer has taken everything great about Scanned Synth Pro, upped the ante with all manner of new features, and further sweetened the pot with sample import. The result is Enzyme (VST/AU, with AAX in the works).

With some similarities to physical modeling, scanned synthesis starts with an exciter - in Enzyme's case, a mathematically modeled "hammer" - that stimulates and continues to influence various "nodes", which have mass but no size. The nodes are strung together, pushed and pulled with "springs". The hammer whacks the nodes and springs into action, and the pitches of the nodes are then seen as an ever-changing wavetable.

Confused? Understandable. Fortunately, Enzyme's intuitive interface invites experimentation, and it isn't long before you're knocking out interesting, unusual and, at times, quite musical timbres.

The GUI is divided into four tabbed pages, each one sharing the same volume and stereo width knobs, as well as a waveform display and a trio of buttons labeled Psycho, Danger and Randomize. The last is self-explanatory, the first enables the wavetable to be driven out of control, making the sound harsher, weirder and more metallic (or sometimes having little discernible effect, depending on the patch), and the second adapts Scanned Synth Pro's signal path for what the developer calls a "less refined" sound.

The Master page includes controls for adjusting pitchbend, polyphony, tuning, tuning scale and portamento, plus 16 assignable Performance controls that can be tied to various parameters for quick and easy tweaking.

Then there's the Synthesis page, on which you can adjust the heaviness of the striking hammer and its shape. You can also affect the node position's update rate and the force of the springs, as well as their resting positions (Centre Wave).

One of the most effective features is the Osc Freq setting, which allows you to choose various means of distributing frequencies.

The Connection Matrix lets you determine how the nodes are connected by the springs, offering such mad choices as Small World Networks, Random, Circular, Bubbles and NextBut5, to name a few. Samples can be imported as Hammer, Masses or as the Centre wave.

After all of that, Enzyme's FM parameters seem downright familiar and friendly - and thankfully, so is the user manual. Ditto for the familiar matrix-style routing found on the Modulation page.

Impressively, an unlimited number of modulators can be applied, meaning you can keep piling on LFOs, AHDSR envelopes, Note Property (pitch, velocity) and Audio Property (the amplitude and pitch of various signals) sources until your head explodes.

A quick perusal of the presets will give you only a vague idea of what Enzyme can do. The factory patches are primarily experimental, tending towards sound effects and atmospheres, although there are a good number of leads, basses and pads, too - even standard fare like electric pianos and guitars exude a sort of inner electrical chaos. Radiophonic and industrial fans will love it, as will purveyors of IDM and dubstep.

Just how weird do you want to get? It used to be that synthesisers were all about creating new and never-before-heard sounds. That was the impetus behind the early experimentalists, as well as the pop and rock musicians who embraced the first commercially available synths - they were reacting against what they considered standard, played-out instrumentation.

Yet somewhere along the way, synths became run-of-the-mill, as musicians began imitating their favourite sounds or simply gravitating towards popular preset patches. Now many developers cater to this retro-fetishism with most if not all of their releases, churning out variations on an overplayed theme. Thus, we're always inclined to champion any developer bold enough to stray from the well-trodden path - and even more so when their wares are priced reasonably enough to minimise the risk of disappointment to the intrepid customer.

Enzyme is affordable enough for even the casual experimenter, who will bag themselves an instrument that challenges ideals and preconceptions and - although it might not at first be obvious - is capable of producing sounds of staggering beauty as well as knee-wobbling, teeth-grating terror. For some of us, that's all we've ever asked for.