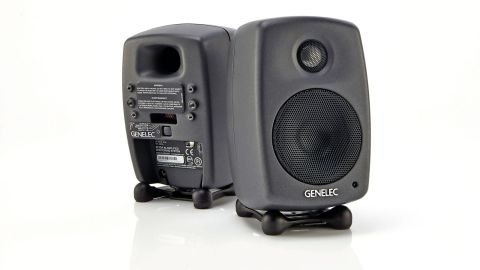 High-quality monitoring that combines portability and durability at a sensible price.

At the smallest end of the Genelec 8000 bi-amplified monitor series is the 8010A. Though relatively light (1.5kg each), the 8010As are solid thanks to the die-cast aluminium enclosure, with metal driver grilles to prevent damage in transit.

Portability is key, with power and input sockets neatly tucked in at the rear. They come with tiltable Iso-Pod rubber stands attached, simultaneously taking care of axis angle and transmission reduction. They feature standard 8000 series mounting sockets for a variety of options, from truss hanging to floor stands.

These are rear ported (bass reflex) enclosures, and just beneath the port is a recess housing five dip switches. Three contour the low-frequency response: -2dB and -4dB bass tilts which combine for -6dB, and Desktop Control which dips -4dB at 200Hz.

A Sensitivity switch pads the input by -10dB to adjust the external volume control range. The ISS disable control switches off the auto-standby mode, which drops power to below 0.5W when no input signal is present.

The 8010As have a maximum output around 96dB SPL at 1m - a realistic listening distance for this size monitor. We were initially taken aback by how large these tiny speakers sound. Once trimmed to match our main monitors, flicking between them is audibly less dramatic than expected, though they have temporarily replaced a pair of Auratones, so we shouldn't be surprised.

Having become accustomed to them we continue to be impressed by the low-frequency response in particular. Though running out of steam a good octave above their larger neighbours, they still ably translate bass components without over-compensating in the low mids/upper bass.

Being in a well damped room we haven't had to use the bass tilt controls, but the Desktop dip of -4dB at 200Hz helped clear up a muddiness caused by proximity to the mixing desk.

The clarity in the lower end of the frequency spectrum is testament to a quality design that keeps things tight enough to easily identify mix clashes. The solid enclosure combined with a well-balanced woofer (stiffness vs flexibility) provides a fast, punchy response with no overt ring-on.

At the top-end the 8010As possess a smooth characteristic, accurate and free from hyping. As with the low-end, there is less extension than on much larger models, though to a lesser extent, so fine adjustments in the 'air' range are harder to perceive.

With a monitor of this size we would expect a harshness in the highs and upper-mids that is not in evidence here at all, and we have been happily working away without any ear fatigue.

The mid-frequencies are well-balanced and accurate, making mixing and tonal decisions quick and easy. This also helps with depth perception, by which we mean the ability to pick out reverb tails, natural decays and relatively quiet sources behind dominant mix components.

The acoustic design of the enclosure and the wave guiding of the front baffle that covers the whole 8000 series allows excellent off axis response and stereo field accuracy. We've been quite happy leaning across to an EQ to make HF adjustments without losing any reference due to strong phase shifts.

Genelec monitors are not cheap and, considering the quality of design, components and sound, nor should they be. The quality of the 8010A is no exception and easily worth the price. If you are regularly on the move they will make a great investment, combining portability and durability equal to the calibre of sound.

There is enough scope for response adjustment to suit any number of mounting situations, from desktops to stands, and there's plenty of power to use even in large spaces. Damn it, they look cute too!