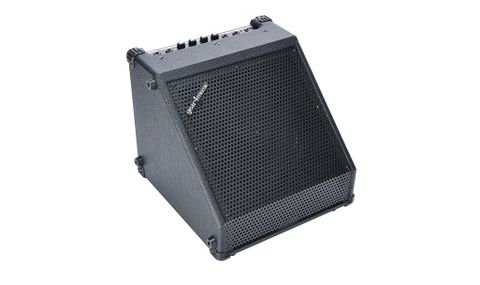 All things considered, it's an okay little monitor for the money - just watch your back when lifting it.

This active wedge monitor may be cheap but it feels well built on the whole. It's pretty heavy, weighing in at 15kg (33lbs) and is designed as a keyboard wedge, or for using with electronic drum kits.

Comprising a 10" main driver with a 3" horn and with 30 watts (RMS) of power, it goes quite loud, although the speaker and case don't seem to be able to withstand the full amount of power onboard - it starts to rattle when pushed hard. This is surprising considering the overall weightiness of construction but we were testing it with a pretty subby Moog bass sound.

Whilst the monitor sounds good in general and is pretty balanced at lower volumes, the character of the speaker itself changes considerably when pushed a little by kick drums or bassy synths, so maybe run a compressor or eq before the amp to tame any nasty peaks.

Having said this, the amp's character doesn't massively colour what's been fed into the inputs, which is great at the price point. The 2-band eq (low and high) is actually good quality too and you can get more volume out of the DR30 by rolling off excessive subs/lows if necessary.

There are two inputs available - a standard line in jack and an 'E-Drum' input which is supposedly optimised for electronic drum kits, though it's not clear how this is different to the line in from the specs.