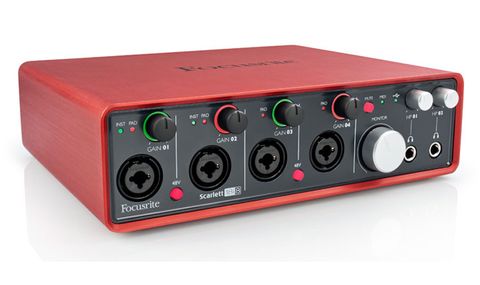 Following a string of glowing appraisals, (read our Focusrite Scarlett 18i20 review), the firm's distinctive red interfaces have continued to build a following and dazzle with their USB 2.o-based performance. Now we have the 18i8 on the bench for review, which is the mid range unit, sitting just below the Scarlett 18i20.

There's an older Scarlett interface that delivers similar capabilities (18i6) and although this is still available, as stock runs out the new unit will supersede it.

The new interface carries the same styling as the previously released Scarlett 2i2 and 2i4, including the striking red anodised aluminium wraparound case. All physical connections are on the case (so no break out cables) and the unit includes the Scarlett MixControl software.

This handles monitor and output routing as well as global sample rate and sync settings (at up to 24-bit/96kHz). The unit also includes MIDI in and out and is powered via external PSU (note, no USB bus powering), and there are front panel LEDs for both MIDI and USB activity.

One key aspect of the Scarlett design is the high quality Focusrite analogue pre-amp design. This offers plenty of clean gain for mic, line and instrument inputs. Switching between mic and line is handled automatically by plug type.

Out for the count

The 18i8 as the name implies offers a fairly large channel count. It has four pre-amp equipped mic/line inputs with the first two also instrument capable. Round the back are four line level balanced TRS inputs and an ADAT optical input (for a further eight inputs). The main output pair (1 and 2) are rear mounted on balanced TRS connectors and are labelled 'Monitor Outputs'.

Outputs 3 to 6 are assigned in pairs to headphone outputs 1 and 2, and the channel count is completed by the stereo S/PDIF in/out. Phantom power is switched individually in pairs, and the monitor control knob also includes a mute button. In practice,   although the 18i8 has eight output streams, you may have spotted you only have one standard analogue output pair, which could prove limiting.

However, on the upside the 8i8 has two headphone outputs with individual level control. These are hard-wired to output assignments 3 to 6, keeping them clear of the main monitor outputs. It's great to see twin discrete headphone feeds on the unit. This perfectly suits modern recording practices, where you're often recording and monitoring in a single room, and both monitoring on headphones.

The unit is very good sonically. Mics sound clear and open with plenty of gain for lower output dynamics and ribbons. Meanwhile, guitars and basses via the instrument input sound solid and uncoloured.

As interfaces go the Scarletts sound very modern, so we would expect plenty of detail from the outputs and that's what you get. You could say it's almost too much, but it means you can monitor at lower levels and still hear plenty of detail - great for mixing.

It may not be that obvious from the pictures, but the 18i8 is quite a large unit, somewhere between 1U and 2U high. So, with its rubber feet, its clearly designed for desktop rather than rackmount use.

It feels solidly made and should withstand regular use for a number of years. One interesting feature is input level metering. This has been incorporated into the gain knobs themselves in what Focusrite calls a 'gain halo'. The colour is green when the signal reaches -24dBFS and turns red at 0dBFS. In use, we think an interim colour prior to 0dBFS would also be helpful.

Clearly the 18i8 is firmly angled toward someone tracking multiple inputs, who also needs discrete headphone feeds and studio monitoring. It's a pretty tidy interface, though. We like the way it looks, sounds and behaves and it is priced very competitively.