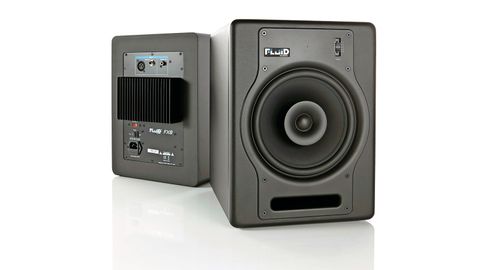 Nearfield coaxial monitors with 8-inch bass drivers for under £300 - the FX8s are great value.

Fluid Audio has only been around for three years but the company, founded by Kevin Zuccaro who was in charge of monitor design and voicing at M-Audio, has come up with a range of several small powered nearfield monitors in that time, including the F5 which we looked at earlier this year.

The latest, the FX8, is the largest studio monitor in their range and a departure from their usual two-way design with tweeter above the bass driver, in that it's a bi-amped dual concentric (also known as coaxial) design.

In a traditional two-way monitor design, the audio, split at the crossover, can collide when radiated from the separately located tweeter and woofer, but a coaxial design ensures that all frequencies coming from the tweeter and woofer radiate from the exact same position (point source), which ought to translate into better phase coherence and superior imaging.

With thin acoustic isolation pads on their base, and constructed from MDF reinforced with internal bracing, the FX8s are sized on a par with many of their competitors - probably a little too large for sitting on a desktop next to your computer but just right if you can sit them on stands or a strong shelf a little way from your favoured seating position.

All about that bass

The bass end here is handled by an 8-inch low-frequency driver with composite paper cone that's driven from an 80 Watt amp and there's also a bass reflex slot port just below it.

The coaxial set-up in this instance sees the 30mm silk dome hi-frequency tweeter, driven by 50 Watts of power, sitting in a metal waveguide that extends out from the centre of the woofer, putting the actual tweeter level with the woofer's outer rim.

A small red LED on the fascia indicates when the monitor is turned on, but the rear panel switch that accomplishes this is the only thing you need to access round the back once the connections have been made.

There are no tonal controls at all to adjust, just a volume control, and that is placed on the fascia for easy access and runs from silence up to 0dB, with an indented position at -6dB. Connectivity covers all the common options with XLR, 1/4-inch jack and RCA phono sockets.

Fluid Audio says that it prides itself on the importance of speaker imaging. Its goal is to present a realistic soundstage where you can pinpoint and place each instrument exactly where you want it to be in the mix.

A dual concentric design doing its work ought to achieve that goal and, when listening to some mixes on the FX8s, it does become apparent that there is a nicely detailed soundstage. There is a very good sense of sound location across the stereo spread as well as a decent sense of space back to front.

Mixing a track using the FX8s, we were able to clearly hear instruments as we panned them into position. Clarity of sound is very good across the frequency range and the 8-inch woofers, combined with the port, will give you plenty of bottom-end; although if you think it's too much for your situation, as mentioned earlier, there's no bass cut facility to help sort it.

As with any monitor, though, it's a matter of getting familiar with how they sound and, overall, we felt that the FX8s were monitors that we would have no trouble using on critical mixes.

There are loads of monitoring options in the sub-£400 range, but, if having a set of coaxial monitors appeals, you'll find that there are not an awful lot of them around for these sort of prices, making the FX8s something of a rare beast.

Then again, you might not be bothered whether your monitors are coaxial or not. Either way, Fluid Audio does seem to be a company that delivers plenty of bang for the buck, and at under £300 the FX8s are really good monitors for the price.