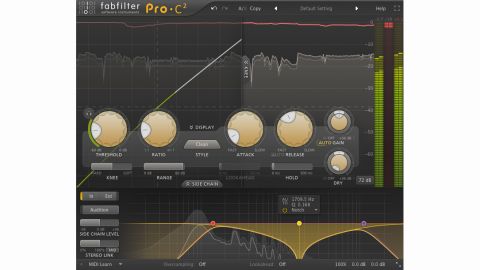 A thoroughly modern compressor that makes up for a lack of sonic character with its brilliant interface, controls and styles.

FabFilter's original Pro-C compressor debuted back in 2007, which makes it something of an OAP in plugin terms.

Back then, we were impressed with its modern design and sidechain routing capabilities, awarding it full marks. However, dynamics plugins have come on a long way since then, and FabFilter has an impeccable reputation to maintain - its most recent release, Pro-Q 2, also garnered a perfect score - so expectations of Pro-C 2 (VST/AU/AAX) are very high indeed.

The first thing that strikes you about Pro-C 2 is that it makes the once-cutting-edge fascia of the original look rather dated. Now we have a radically redesigned front-end that devotes almost all of its real estate to the scrolling level and knee display, with level and gain reduction meters on the right-hand side - although all of these can be hidden with a click of the 'display hide' button.

It's also resizable: the AAX, AU and VST 2.4 versions can be set to one of three sizes (740x450, 840x520 and 1000x660), while the VST3 version can be stretched to any size you like. All versions support Retina displays on Mac and HiDPI displays under Windows, and, like Pro-Q 2, Pro-C 2 can even be switched into full-screen mode.

The main controls sit at the bottom of the main display, overlapping it to an extent determined by the currently selected GUI size (and not getting in the way too much at the smallest setting, where they only obscure the signal level below -40dB).

Their layout is arranged in such a way that you intuitively start with the Threshold and Ratio knobs on the left, working your way over to the right via the envelope and output controls. This thoughtful approach to interface design might seem like a small thing, but it makes Pro-C 2 easy to get started with and quick to use.

There's no denying that Pro-C 2 has a pretty, intuitive and info-packed interface, but what we really care about is how it sounds. The two biggest enhancements in this area are the addition of five new compression styles and a Knee fader that can be set anywhere between 0dB (hard knee) and +72dB (soft knee), and which the manual describes rather vaguely as affecting the "roundness" of the compression around the threshold.

That lack of explanation isn't a major problem, as the Knee is really intuitive to use, and the theory isn't particularly taxing anyway: at softer Knee settings, compression will start to kick in before the signal actually reaches the threshold, giving a smoother sound. Thus, the Knee fader can be used to harden or soften the compression (or even achieve almost saturation-like effects when a soft Knee is used in conjunction with a fast Attack).

Having this extra dimension of control over the sound (the original Pro-C had just two fixed Knee settings) is a powerful thing that, in conjunction with the various compression styles, makes Pro-C 2 an even more flexible and creative part of your toolkit than its predecessor was.

Pro-C 2 makes improvements to the envelope section, too, with new Hold and Lookahead faders. Hold is simply another envelope stage that delays the onset of the Release stage. In the same way as Knee, it can be used to make the compression sound more transparent or, at longer settings (up to its maximum of 500ms), introduce pumping effects.

Also new, the Lookahead function is turned off by default because it adds latency, but when active, it can be set between 0 and 20ms to increase transparency. There's also now a second Audition button supplementing the sidechain Audition button of v1, which enables you to hear only the compressed component of the signal, giving insight into how much dynamics shaping is taking place. Useful and instructive.

Other newly added niceties include 2x and 4x oversampling modes; a convenient Mix fader that can scale the change in gain from 0 to 200%, effectively acting like an overall 'compression amount' control; a Range parameter for limiting the maximum gain change applied; and the ability to trigger compression via MIDI input.

The sidechain section's previously basic LP/HP filter section has been radically enhanced and now boasts a choice of slopes from 0-96dB/ octave for the low- and high-pass bands, plus a mid band that can be set to Bell, Low Shelf, High Shelf, Notch, Band Pass or Tilt Shelf mode with adjustable Q. Nothing revolutionary, but all solid enhancements that will please Pro-C fans.

Pro-C 2 is immediately one of the best compressor plugins money can buy - it's flexible, reasonably priced, and sounds beautifully clean. The only downside is that it never really gets down and dirty in an 'analogue' sense, but considering the excellent results it delivers for everyday mixing, that's a mere quibble. Once again, FabFilter is leading the way with another sensational plugin.