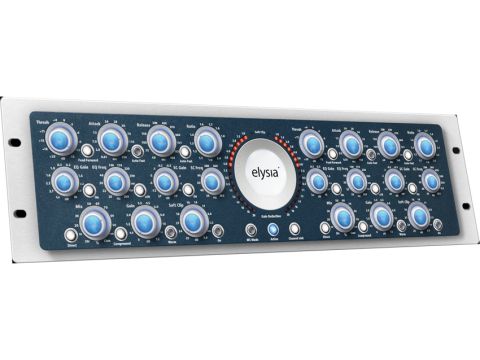 Elysia is a young German company, made up of a partnership between a former SPL designer (responsible for the Transient Designer, among other projects) and a marketing guru, specialising in hi-end professional audio processors.

Discrete class-A circuitry, complete absence of integrated devices and unusual topologies are some of the common highlights for Elysia's hardware products.

The hardware Alpha Compressor fully embraces the company's esoteric beliefs and is intended for top-end mastering studios - its RRP price of over £8,500 clearly makes it a wild dream for most.

The software version, programmed by Brainworx, is surprisingly affordable and aims at delivering the same uncompromising quality and functionality as its slightly higher-priced hardware counterpart.

The Alpha Compressor plug-in requires an iLok account and hardware dongle to activate it and run it in your DAW.

There are two versions of the plug-in you can choose from: the Alpha Mix, available both in mono and stereo format, and the Alpha Master that is stereo only.

The Mix is effectively a stripped down version of the Master. The plug-in features a nice and easy to read GUI, painstakingly modelled on the looks and functions of its hardware counterpart, with the only notable difference of the Transformer button, replaced by the Warm button on the software version.

At first sight, it's hard not to be overwhelmed by the sheer number of knobs and buttons - the GUI takes up most of the available screen width on a laptop.

The Master plug-in is a dual-mono design, and familiar controls are laid out on the top row - threshold, attack, release and ratio.

Both attack and release have a useful 'auto fast' option that tracks the dynamic content of the material - an attack set to 100ms will automatically dip to lower values for fast and loud transients and then return to nominal.

An important option is the Feed Forward button, which radically changes the compressor's topology by moving the sidechain feed from before the compression stage to after.

This turns the Alpha Compressor into a much harder-sounding audio processor and yields surprising amounts of gain reduction and even negative ratios, and also inﬂuences attack values - a sort of 'overdrive' button when more extreme behaviour is needed.

The middle row hosts two by-passable sets of equalisation controls: a clever Niveau filter with positive/negative gain adjustment and frequency range (including a handy x10 button) and a filter for the compressor's sidechain - this latter one continuously adjustable into either a low-pass or a high-pass with variable attenuation.

Each channel also features a make-up gain control and a simple matrix to enable 100% dry (Direct) or 100% processed (Compressed) signal. If both buttons are pushed, a Mix control allows you to blend dry and compressed signal for parallel processing.

Just like the hardware unit, two further options are available on the output of each channel. The Soft Clip control acts like a limiter but instead of squaring out the output in a brickwall fashion it introduces a subtle saturation that results more in a 'rounding-out' of the waveform.

This allows you to push the make up gain by several dB more with little change to the sound, until extreme settings make the distortion more apparent.

The 'Warm' button replaces the switchable audio transformers that are present on the hardware unit. This option has some impact on the music as the harmonic content is modified and the 'warming' effect takes place, though still well within the realm of mastering subtleties.

The Channel Link button gangs all mirrored controls on both left and right channel and also applies the resulting compression to both - this means that the channel with the loudest signal will impose its compression values to the other.

The MS Mode button turns the Alpha Master into a Middle+Side mastering plug-in. In this mode, the link button is not effective on the Niveau filter, the mix and gain stage as well as the Warm button. This is to allow some degree of tweaking between channels.

We started off using the Alpha Mix plug-in, as it's easier to get a sound using first the simplified version. Three functions from the Master version are removed here - Niveau filter, Soft Clip and M+S Mode.

The plug-in is a joy to use, and a particular credit is due to the Auto Fast Attack and Release options, which are deservedly the best we've heard in any compressor.

There's a smoothness of operation here that can easily range from subtle, invisible compression to heavy and distorted. When we moved up to the Master version, we truly enjoyed the M+S option - we're familiar with M+S compressors, but the Alpha Master makes it an easy choice with plenty of give for even the most awkward settings.

Also notable is the ease of use and musicality of the Niveau filter that make it a simple and effective tool. The Soft Clip option sounds good at moderate settings, but we found that when pushed too hard it gives out a raspy sound that isn't always usable as a distortion trick.

We also found it difficult to maintain a given balance between channels while in M+S Mode while trying to push level into the Soft Clip section with the Make Up gain - an auto-gain option for the clipper would be quite handy.

This plug-in is a real achievement for its raw musicality and sheer number of unusual but much-needed functions. While not recommended to those that need a simple fix, we cannot think of a better mastering compressor plug-in or indeed for mix buss compression.

Due to its oversampling design, it is fairly power-hungry so we would not recommend it for repeated channel strip use, though it would feature well on selected instruments.