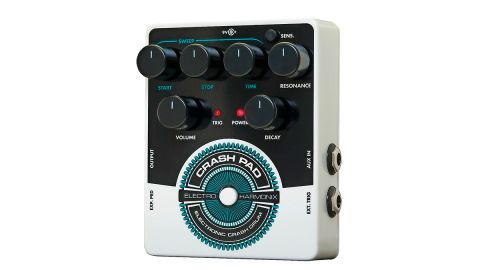 The Crash Pad is a drum synth full of character with great all-round usability.

We got a little excited when Electro-Harmonix announced both the Super Space Drum and Crash Pad analogue drum synth boxes.

As both are faithful recreations using the same analogue circuitry as the originals, we couldn't wait to get stuck into some retro-beat action. Today, we look at the Crash Pad.

The workmanlike Crash Pad is capable of creating kick, snare, tom, hi-hat and cymbal sounds and opening up the decay will spew forth more drone-like sounds. Enveloping the sound is taken care of with the Start, Stop, Time and Decay controls and they're all fed through the resonant filter, controlled by the Resonance knob, allowing you to craft all manner of percussive noises that will easily fit into straight-up Dance numbers, or more atmospheric odysseys.

All drumming aside, you can feed any signal through the resonant filter via the Aux In socket. The filter can also be controlled externally by an expression pedal or CV sequencer, so there's really a lot of potential in this little box.

The unit features a trigger button on the front panel, which is just a switch and feels rather cheap. It doesn't lend itself to performance either - a small pad would be much better. Instead, the switches are fine for just demoing sounds as both units can be triggered externally with drum triggers or a clock generator, such as EHX's very own Clockworks.

The CP has plenty of sonic variation here, making it a more useful addition to your set-up than the recently-released Super Space Drum. What is slightly against both units is their price to function ratio. Compared with the likes of the Korg Volca Beats, you're not getting much for your money, but they still offer bags full of character to warrant their price tag.