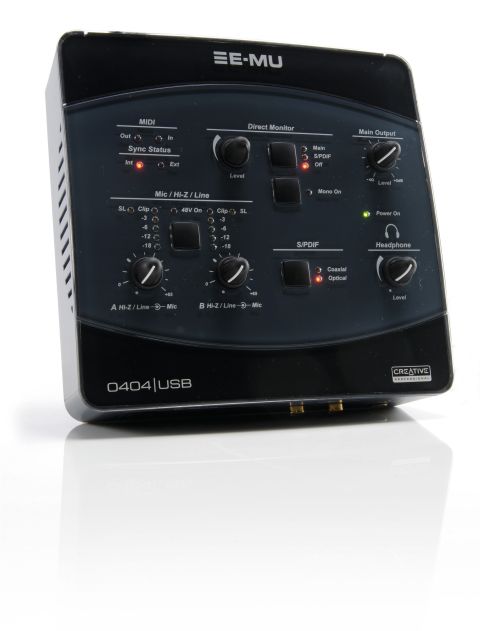 The 0404 offers excellent connectivity, great performance and a fine software bundle. At this price, you couldn´t ask for much more.

It´s a sure sign that laptop recording is becoming big business when almost all of the audio interfaces landing on our reviews desk are USB or FireWire. It wasn´t so long ago that PCI-based models were dominant, but new ones are something of a rarity now. One interface that is PCI is E-MU´s 0404.

Sure enough, though, the company have now seen fit to launch an external version that - as its name suggests - operates over USB 2.0. At launch, this was PC-only, but beta Mac drivers were released just as we went to press.

To what level the 0404 USB 2.0 is comparable to its PCI sibling isn´t really clear - it may be in name only. The external version certainly doesn´t come with E-MU´s PatchMix routing software or any hardware DSP-assisted effects, though both were features of the PCI model. The hardware itself is a slightly-larger-than-expected desktop box with input connectors at the front and output connectors at the rear.

There are only left and right (balanced) analogue outputs, so if you´re into surround mixing, this isn´t the interface for you (unless you´ve got a digital AC-3 decoder). The inputs are presented as Neutrik combo jacks, which offer microphone, instrument and - surprisingly - balanced line inputs for both the left and right channels. Professional-standard connectivity, in other words.

The front panel boasts a 1/4-inch headphone jack too. We can also celebrate the return of a couple of long lost friends: coaxial and optical digital connections. This is quite a surprise, as it´s been a while since we´ve seen them on an interface of this type. We have to ask, though, what might you connect them to? Both CD and DVD players are now built into our computers, and most other digital hardware equipment (reverbs, samplers, etc) has been emulated satisfactorily in software. That said, the digital I/O might be a selling point for people who have DAT machines, MiniDisc players or similar gear that needs hooking up.

One thing we should make clear, though, is that it´s the digital connectivity that affords the 0404 its 4-in/4-out technical specification. If you aren´t going to make use of this - and let´s face it, most of us won´t - the 0404 USB 2.0 is therefore, to all intents and purposes, only a 2-in/2-out audio interface.

MIDI I/O and a small mini-jack for desktop computer speakers completes the connectivity, but there´s also a socket for a power supply. Sadly, the 0404 USB 2.0 is not bus-powered, so if you fancy a spot of battery-operated recording in remote areas, you´ll be left disappointed. On the plus side, the mains adapter does have the benefit of being unusually lightweight and so wouldn´t add any significant load to the mobile musician´s rucksack.

The design of the 0404 USB 2.0´s top panel is excellent - there´s something very satisfying about the layout and operation of the controls. Phantom-power is available (so studio-grade mics can be used), and, remarkably, there are ground-lift switches on the bottom of the unit so that hum problems can be easily fixed. The separate level controls for headphones and speakers are very welcome, while the status lights for MIDI In and Out are helpful too.

In use, the unit sounds great - there´s absolutely nothing to complain about on that score. The control panel is easy to use, since there isn´t anything much to play with except the sample rate (which goes up to 192kHz) and the ASIO buffer size. This second option is selected from a curiously large dropdown list - a bit odd, since at latency times greater than 40ms or so, you´re usually not so fussy about the precise time. We struggled to get acceptable performance at latency settings lower than 10ms, though new drivers might improve this in the future.

If you do have any latency problems, you can use the well-worn workaround that is direct monitoring. This isn´t our favourite alternative to ultra-efficient drivers, as you still have to use various software tricks in order to supply reverb and other effects to the person performing. What´s more, zero-latency direct monitoring isn´t even an option if you´re using a guitar amp simulation. These reservations aside, direct monitoring works well with the 0404. The level of direct sound is set with an encoder (rather than a balancing control) and the monitoring has a separate on/off switch. There´s also the somewhat less than ideal ‘mono direct monitor´ button for occasions where you´re recording (for example) a guitar and vocal at the same time.

Overall, though, the E-MU 0404 is more than just a respectable audio interface - it´s a very good one. The combination of top-class audio performance and comprehensive audio connectivity means that it can cope well in a wide variety of situations. Couple this with a cracking software bundle (see the Tooled up boxout) and a surprisingly low price and you´re looking at a very good deal indeed.