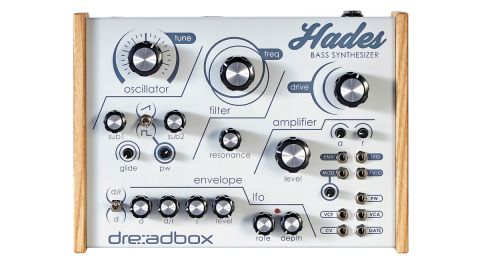 The Hades is a fairly straightforward monosynth, but it's well-designed and packs some serious low-end punch.

When a synthesizer is named after the Greek god of the underworld and features a big, prominently positioned knob labelled Drive, it doesn't take a genius to work out the sort of sonic territory it's aiming for.

It comes as little surprise then, to find that Hades - a semi-modular, analogue bass synth from Athens-based outfit Dreadbox - is an instrument that values grit and weight over subtlety or nuance.

At its heart, the Hades is a fairly straightforward analogue instrument. It features a single oscillator, switchable between square and saw wave shapes, with a glide control and a pulsewidth control for the square wave.

There's a big oscillator tune knob too (being a classic-style all-analogue synth, the Hades takes a good five to ten minutes of warming up before hitting its correct tuning, but after that seems pretty stable). This main oscillator is joined by a pair of sub oscillators, pitched one and two octaves below the primary osc, each with a level control for dialling it in.

Beyond that the Hades packs a low-pass filter, two envelopes - a two-stage attack/release envelope hardwired to the VCA and a three-stage patchable envelope - and a triangle wave LFO, which is hardwired to the oscillator pitch but can be re-patched elsewhere.

The only other controls are a VCA level knob and the aforementioned Drive control. All this is housed in a solid metal chassis with smart-looking wood panel ends and a MIDI input, power input and single 1⁄4-inch mono output along the rear.

This straightforward nature is not to say that the Hades is merely some lumbering simpleton, however. While its signal path might not offer much that we haven't seen on countless monosynths before, the elements here are all finely tuned to create tight, powerful bass sounds.

For starters, the two sub oscillators are great for dialling in full, frequency spectrum-filling bass tones, and the Glide setting can create some lovely, slinky legato sounds. On the envelope front, while the two-stage VCA envelope is a touch limited, the three-stage filter/patchable env is more versatile than it might first appear.

Here, the second stage can be switched between Decay and Release modes, and a level rotary allows for intensity adjustments. Dreadbox describes this envelope as 'extra snappy' and - coupled with the filter - it's certainly well suited to adding attack and punch to bass sounds. The LFO, meanwhile, ranges from a slow chug all the way up to almost 1,000Hz, allowing for basic, gritty modulation effects.

Where the Hades goes beyond standard monosynth territory is its Eurorack-friendly patch panel. Here we get 3.5mm outputs from the patchable envelope, LFO, mod wheel (with control rotary) and a 1V/Oct pitch tracking output.

Below these are a bank of 3.5mm ins for CV, gate, filter cutoff, VCA level (overriding the AR envelope) and pulsewidth. It's not exactly the most complex patch panel on a synth of its kind - for internal reworking, the MS-20 is far more flexible, and Moog's Mother-32 offers much more for Eurorack fans - but that's not to say it's not appreciated.

With two mini patch leads in the box, it instantly adds an extra dimension of sound design possibilities, and we can see modular fans quickly becoming attached to that 'extra snappy' envelope.

If we were to be critical of the Hades, it doesn't really bring a lot new to the table. Its 3-pole filter is a bit unusual and, though patchability makes it slightly more flexible, at its heart it's a pretty standard monosynth.

Also, given its spec and price point, the Hades faces some pretty stiff competition. While the aforementioned synths from Korg and Moog are both more expensive than the Hades, its £220 street price puts it directly up against the Arturia MicroBrute, which features both a keyboard and sequencer.

All of these points, however, overlook the fact that the Hades is a solid and very likeable bass synth. It's sturdy, smart looking and capable of creating powerful and characterful bass sounds.

We can see it becoming a studio workhorse - the sort of instrument you regularly turn to for bread-and-butter bass sounds whenever a track needs a solid, unfussy foundation. If you're on the hunt for something unique, deep and subtle, this probably isn't it, but for a reliable source of power and grit, the Hades would be a smart choice.

In all, it's a welcome addition to the affordable end of the analogue synth market. Sometimes there's nothing wrong with keeping it simple!