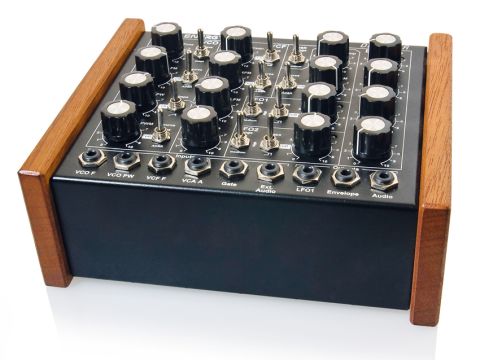 There's more going on in here than you'd expect. Dark Energy has the power to suck you into its analogue world.

Dark Energy is a single oscillator analogue mono synth, with built-in MIDI-to-CV convertor and a USB port to integrate it in to the 20th century digital studio.

Cosmetically speaking, Doepfer has managed to build a very attractive little box, with its dark black steel, cherry red wooden ends, elegant rows of knobs and compact switches. The components feel nice and sturdy to tweak, but as there isn't that much real estate their careful arrangement means there's just enough room to wiggle switches without accidentally hitting others.

Also in the box are half a dozen short mini-jack cables to patch with, a USB cable and mini-jack to 1/4-inch for the main audio output. You can plug in a keyboard or sequencer through the MIDI In port round the back, connect the USB for MIDI over USB (plug and play), or trigger it analogue via the CV/Gate through the inputs on the top panel. Also round the back are four CV and one Gate output, a PSU socket and a Learn button.

While Doepfer list this synth as having a 'triangle based core', with a choice of the aforementioned triangle, or a saw wave, there's actually a little bit more going on than first meets the eye. When the three-position selector switch is in the central 'off' position you are left with a pulse oscillator, while the PW knob adjusts the symmetry of the square.

It produces an even square with PM in the middle, and this means you can effectively switch off the pulse wave by turning the PW dial to either its max or minimum position. Without the pulse in the mix, you can choose to go with either a pure saw or triangle waveform, or dial some of the pulse back into the equation.

Below it is a dial for PWM, sources are either ADSR or LFO2, and in case you were wondering, both LFOs' modulation is bi-polar and the red/ yellow flash indicates positive and negative direction. The VCO switch selects the range between three octaves, and the basic tuning can be set with the VCO knob, which smoothly sweeps over an 11 semi-tone range.

Dark Energy has a few tricks up its sleeve for expanding its tonal range, one of which is analogue FM. Chose between ADSR and LFO1 from the internal sources or patch something else in from your modular rack via the input on the front panel.

The LFO speed ranges from several minutes all the way up to 5kHz, which brings it nicely into the realms of audio rate modulation. This produces a wonderfully rich range of tones, from buzzing and flapping to biting, metallic klangs and robotic talk boxes.

Next in the chain is the 24dB low-pass filter. This features keyboard tracking and is self-resonating, so it doesn't require the oscillator to get it sounding. There are two types of FM on offer: linear LFM and exponential XFM, both of which have a dedicated depth dial. Exponential FM has a selector switch to choose between the ADSR or LFO2 as the source. Thanks to those exceptionally fast LFOs, you can expect to hear some more of that lovely audio-rate modulation happening here if desired, especially when cranking up the resonance.

Speaking of wobble basses, it's unfortunate that there's no option for LFO re-triggering (or BPM sync like we've come to expect from plug-ins), which makes it a bit more chancy to get a tight, predictable pattern going.

Linear is the mellower of the two FMs, and it uses the triangle OSC as the mod source. This produces nice overtones and is more suited to playing melodies as it holds true to its tuning. The Amp has its own dial, which allows the signal to pass through without having to trigger the gate, and the VCA section can be modulated via the ADSR or LFO 1. Limitations here mean you can't use the ADSR and the LFO at the same time so it's a case of either/or if you want to produce AM tones.

Another three-position switch adjusts the ADSR range from tight and snappy to long and loose, which can also be useful when trigger via the Gate input.

As the surface of the box remains pure to the purpose of sonic tweaking, the boring stuff like setting options is dealt with another way entirely. There is a tiny recessed switch in the back panel - hit this to engage the learn mode and the button will flash as the unit's brain waits for a designated MIDI program change message which corresponds to changing a system setting.

There are a number of reasons why you might need to use the learn function. Some of these include changing the re-trigger mode, assigning MIDI CC controllers, adding velocity as a multiplier to CV3 and CV4 and key assign modes.

There is a dedicated stack mode for controlling the note priority when chaining two or more units together. This makes it possible to build a polyphonic synth from multiple units, much like the Oberheim SEM modules, adding extra voices as you feel the need. Bear in mind that there is no MIDI Thru socket round the back, so the easiest way to connect them up would be through a MIDI Thru box or a USB hub.

For the really adventurous, the manual has details of another way to link units involving connecting the internal jumpers, and there's even a kit with pre-drilled wooden ends to accommodate the connections.

Doepfer has maximised the amount of things you can do with this box by providing all the main modulation options on quick switches and lots of audio rate FM on the oscillator and filter sections. You can also use velocity as a multiplier when patching CV3 and CV4 as modulation sources, plus there's a hidden arpeggiator function which can even sync to MIDI Clock.

Dark Energy is perfect for the old school vibes of Boards of Canada, squelchy acid basslines, John Carpenter soundtracks, and R2D2 bleeps. This self-contained box will also appeal to sonic experimenters who want to explore the possibilities of hooking it up to other modular gear or feeding it sound to mangle.

Listen to what Dark Energy can do:

Liked this? Now read: The 11 best DAW software apps and The 11 plug-ins you can't live without