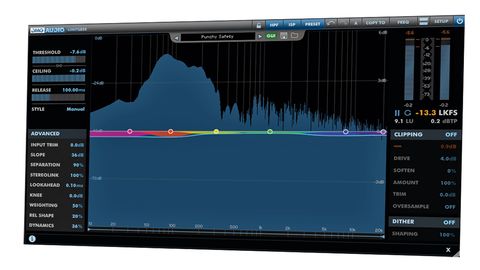 Limitless lives up to its name, making masters louder than you ever thought possible, while being intuitive and familiar.

Despite rumours of a loudness war ceasefire, the demand for ever-louder masters persists.

DMG Audio reckons the proprietary dual-stage multiband technology and other innovations found in Limitless (VST/AU/AAX/RTAS) make it possible to push your levels while retaining dynamics and fidelity. We've heard similar claims before, so we started out sceptical…

Limitless loads with a very simple default interface, with its six frequency bands at theready. All you have to do is adjust the Threshold, Ceiling and Release parameters to hear your audio driven towards the ceiling.

There are also seven Style options that govern 'under the hood' settings such as Lookahead, Knee, Weighting, Release Shape and Dynamics (ratio).

Switching the plugin to Advanced mode adds comprehensive clipping and dither options, aswell as input trim, stereo linking, crossover slope and band separation controls. These last two are 'hidden away' because Limitless is primarily meant to be used as if it were a single-band limiter - the multiband side of it is more of a behind-the-scenes process than a 'feature'.

We pitted Limitless in its default state against a selection of high-end brickwall masteringlimiters by companies including PSP, Voxengo, FabFilter, Slate Digital and iZotope, driving full mixes into each and comparing the results.

Although there are other multiband limiters out there that can be effective as part of a mastering chain, few are designed to be the final brickwall "maximiser" stage as Limitless is, hence their exclusion from our tests.

So, on with the comparison! With moderate gain reduction, Limitless sounded totally transparent, every time, while the other limiters sounded a bit crunchier - not necessarily in a bad way, though - and, notably, slightly louder.

Our next test was to push each limiter as hard as it would go before it started to exhibitnoticeable artifacts. In this test, Limitless really shone. All the single-band limiters we testeddistorted the low frequencies, but Limitless would shape its low bands separately, achievinggreater loudness overall. Notably, iZotope Ozone 7's IRC IV algorithm - which uses a typeof spectral/multiband processing - stood up much better than the more traditional top-of classlimiters we tested against Limitless.

It was a little tricky to accurately compare IRC IV to Limitless since the controls are quite different, but ultimately we can say with confidence that on full mixes, Limitless managed to go louder with greater transparency, where we struggled to shake off a slightly distorted effect with IRC IV when pushed to comparable levels.

Working our way through the presets (the gain parameters can be locked, handily), itbecame clear that Limitless is a diverse beast that can be adapted to requirements.

The freely-resizable interface gives very fast, clean and smooth visual feedback via a displaythat switches between a frequency analyser (for crossover configuration), a loudness historygraph, and a waveform display with gain reduction curves - and you get a constantreadout of loudness values to boot.

This may be the best-sounding master bus limiter plugin yet, with easy operation andadvanced algorithms. The CPU-intensive Limitless isn't designed for high track counts,but as a mastering limiter with unbelievably low levels of distortion, it's simply world class.