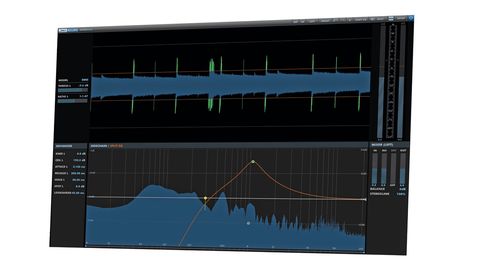 Creative, fast and functional, Expurgate is one of very few gate plugins on the market deserving of 'essential' status.

They might not be the sexiest of plugins, but gates can be essential and surprisingly creative tools.

DMG Audio's new one, Expurgate (AU/VST/AAX), is a powerful mid/side-capable processor that aims to do it all.

Expurgate launches with a simple interface housing Model (core algorithm), Threshold and Ratio controls. In many cases, that's all you need, and it's as quick and effective a gate as we've ever used, thanks to the simply stunning default model, DMG.

The first of six, this model blends aspects of digital and analogue gate responses, and it's smooth without being loose. The second model, Textbook, opens and closes strictly 'by the book' (or by MIDI triggering).

Ducker acts like a ducking compressor, reducing the signal level when it receives a sidechain signal (internal or external). Old Digital, Brit Channel and Brit Mega are modelled on classic hardware and another, unspecified plugin.

Helping you to keep track of what Expurgate is doing, the real-time analyser display shows the incoming signal level and the amount of reduction taking place, the top half representing Left/Mid, the bottom half Right/Stereo.

The first of these enables three-band EQing/filtering of the sidechain signal, while Split EQ offers five filter types for gating targeted frequencies - like a de-esser for any frequency range.

One example of its usage is removing low-end from kick signals in a loop, leaving everything else full and warm. Engaging Linear Phase mode offers a smoother sound with fewer artifacts.

At the right of the Advanced section are the Mixer controls: Input and Output levels plus Make Up gain. These adjust mid/side or left/right signals, while stereo routing and triggering options allow either channel to act as a trigger or destination for itself, the other, or both.

The action doesn't stop there. The Settings pages offer endless tailoring and customisation possibilities, including Separated mode, which mixes back in the removed signal, allowing sharp gated transients to be recombined with some of the dry sound to avoid overt 'holes'.

Another favourite is Noise Detector, which automatically closes the gate with sibilant sounds, facilitating instant removal with minimal tweaking, and can even act in reverse, only allowing signals it classes as noise to pass.

The latter is great for removing unwanted material from percussion loops, and its effectiveness can be increased using Lookahead (up to a whopping 100ms) for seriously surgical action.

The feature list goes on: resizeable GUI; auditioning of any part of the internal signal path (gated-out audio, trigger signal or output); 2x oversampling mode; customisable analyser display settings; eight settings comparison banks; and even the ability to bypass all instances of the plugin with a single command.

Like all DMG plugins, Expurgate looks simple when you first fire it up, but proves staggeringly deep and sophisticated once you get into it.

After a month of use, we're still discovering new applications for it, and it's clear that it takes the crown as not only the most powerful gate on the market, but also the quickest and most effective one for basic gating. Buy it.