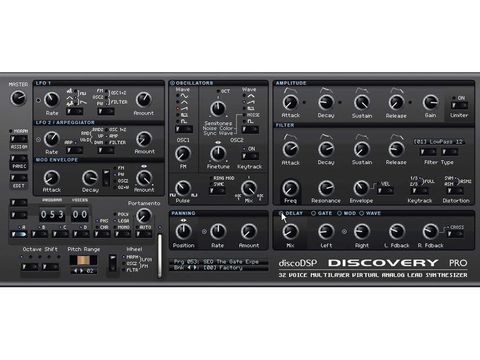 The original Discovery was always a winner, and the additions in Discovery Pro make for an even better instrument, with many fresh sound design possibilities revealed.

discoDSP's Discovery was one of the company's first and finest efforts. Heavily inspired by Clavia's Nord Lead series, Discovery earned a place on many a hard drive with its dual-oscillator architecture, resonant filter and built-in effects.

Borrowing the layers and morph abilities from the instrument that inspired it, Discovery was - and still is - a synth capable of blistering basses, lush pads and scorching solo sounds.

Discovery Pro ups the ante considerably - with more filter types, more oscillators and advanced features such as sample import - without exacting a prohibitive price. Yes, it costs twice as much as its sibling, but it's still hardly expensive and, as you'll see, it offers a much wider palette than the initial version.

Like the original, Discovery Pro is a PC VSTi that features a pair of virtual analogue oscillators, each of which is capable of spitting out the usual vintage-style waveforms. This time, however, the developers have tossed in a parabolic waveform that sounds
something like a cross between the sine and triangle varieties. It's ideal for mellow sounds and is tucked away under the sawtooth wave selection control on the front panel.

The oscillators are well-equipped for most analogue-style duties. You can sync them up, vary the pulse width and even perform a bit of ring modulation. Noise is provided in both white and pink flavours.

In addition to the two analogue-styled ones, Discovery Pro packs in a third oscillator that's devoted to sampled waves. It's a rudimentary affair, offering only a single sample per layer. Nevertheless, the bundled selection of waveforms includes
everything from plucked strings to vintage synths, and increases the sonic potential exponentially.

Better still, users can wrangle their own samples into the thing, although at this point the process becomes a bit fiddly, requiring one to compress a bunch of samples into a Zip file and change the file extension to '.dwb'.

We had a bit of trouble getting it to work until we discovered that the samples can't be placed in sub-folders. Only 16-bit files worked for us (though we were pleased that our loop points were recognised), and the developer recommends leaving 128 samples after the loop end to prevent clicking.

We're told that future updates will improve the sample management, but even now, the system is quite usable. In our opinion, the difficulties we encountered were less to do with the implementation and more to do with not having enough information. A few more tips in the otherwise excellent PDF manual wouldn't go amiss.

Discovery Pro sports a feature-packed filter section, offering no less than a dozen types (including the usual low- and high-pass varieties in both 12 and 24dB incarnations). There's also a formant filter and four new Moog-style filters named X and Y (each comes in 12 and 24dB varieties).

Resonance is, of course, onboard and there's a dedicated four-stage filter envelope generator. Dual mode distortion is also on tap for those classic overdriven Moog sounds and squelchy 303 basses.

In addition to the filter envelope, discoDSP has provided a number of other envelope generators. The amp envelope is also of the ADSR mould, while a simple two-stager is used for modulation and can be routed to FM, pulse width, OSC2 or OSC3 and wave pitch.

Coolest of all, however, is the new Graphic Modulation envelope - a 32-step customisable affair that can be used to control OSC2, FM, pulse width or the filter. This is a great addition, opening up many new creative possibilities.

While we're on the subject of modulation, we should point out that Discovery Pro includes a pair of LFOs. The first of these is your usual bread and butter model, featuring random, square, triangle and saw waveforms, along with a 'low-pass random' wave with a smoother curve.

LFO2 is similar, but is locked to a pure sine wave. However, it can also act as an arpeggiator. Up, down, up and down, and two different random patterns are included, and you can play notes across a five-octave range. It's nothing new, but it's good fun.

You can beef things up with one of four big, fat unison modes, and if that's not enough you can even roll your own custom unison mode via a simple text file. Geeky, to be sure, but we like it!

Finally, you can slap a bit of echo across your sounds with the built-in delay module, or make use of the included gate processor for those jagged trance patches.

We've always liked Discovery, so it follows that we like Discovery Pro even more. The presets might be a little 'trendier' than those of the basic version, but they nevertheless show off exactly what can be done with some of the new features.

Discovery Pro continues discoDSP's tradition of offering excellent sound quality and a flexible signal path in a package that won't leave you scratching your head. Making your own sounds is easy, gratifying, and - most importantly of all - inspiring. What more could one ask of a soft synth?