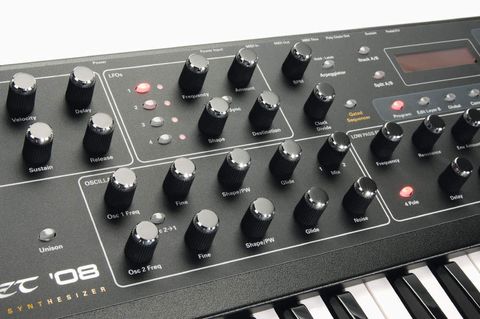 A worthy, classy sounding successor to the original Prophet 5. These will fly off the shelves!

For the synth geeks among us, Dave Smith's name is synonymous with some of the best analogue synths ever made. The Prophet range of synths, including the Prophet 10, 5, T8 and Pro One made under Smith's company Sequential Circuits, are the stuff of legend due to their ballsy sound and great feature sets, and were the mainstays of many a pro keyboardist in the '70s and '80s.

In a time where analogue synthesis is having a great renaissance and Smith's current company is doing very well with the Evolver range of hybrid analogue/digital synths, it makes sense that the Prophet range is revisited to bring it into the here and now and to introduce a new generation to the sound of polyphonic analogue synthesis.

The ﬁrst thing that strikes you about the Prophet 08 is how compact it is, and this makes it perfect for those with space-strapped studios or even for slinging in the back of the car for gigs. By moving the pitch and mod wheels above the keyboard (they work surprisingly well in this position) and by using the (dreaded) external 'wall-wart' power supply, Dave Smith Instruments (DSI) have enabled the main body of the Prophet 08 to be only a little longer than the ﬁve-octave keyboard it contains.

The keyboard is semi-weighted and allows for very fast and accurate playing. It's also great that the keyboard incorporates aftertouch and this is very well implemented here. Often aftertouch can be all or nothing and quite hard to control, but here it's very smooth and reacts musically and predictably.

The interface is well laid out and it's great that the ﬁlter controls are slap bang in the middle of the panel - although it would have been better if the cutoff and resonance controls had been placed on the bottom row of dials nearer the keyboard for easy reach. The Prophet 5-style dials are the continuous type and feel sturdy, though there's a little sideward play. One thing that concerns us though is that you can't just look at the front panel and immediately know what your settings are - a major change from the Prophet 5.

In fact, it's not until you turn a dial that its corresponding value comes up in the display. In an ideal world, each dial would have its own ring of LEDs - like the Nord Lead 3 or the Moog Little Phatty - but this would add to the price considerably.

The sound architecture and sound shaping features are very comprehensive. This is an eight-voice (eight-note polyphonic) polysynth with two oscs per voice (16 oscs total), which also allows splits and layering of sounds. At this price point that's unique.

Prophet '08 has a 100% all analogue signal path that uses stable and drift-free DCOs (the same as in the Evolver range). Available wave shapes include saw, triangle, saw/ triangle mix, pulse (which, at a setting of 50, becomes a square wave) and noise. The Oscs have a wide ten-octave range from 8Hz to 8kHz, which allows for the creation of any type of sound from deep and bassy through bright and cutting.

The Oscs also use Curtis chips that have been tweaked by Smith for maximum analogueness. These sound huge, raw and phat-as-you-like.

For those that want to simulate the drift associated with VCOs there's an 'Oscillator Slop' parameter that subtly shifts the frequency of the oscillators. Other notable features in the Osc section are the Single Mix dial for mixing the oscillators together (this is much quicker than having two separate controls) and separate glide controls for each oscillator (although it's a shame there's no dedicated glide on/off switch).

One other useful control is the Audio Mod dial that allows Osc 1's audio output to modulate the cutoff.

For simulating classic monosynths such as the Pro 1 or Minimoog, Prophet 08 has a very comprehensive unison option that puts it into monophonic mode. This is great for leads and basses where all eight voices can be stacked for massively powerful sounds.

For more simple monophonic sounds, Prophet 08 can be put into One-Voice Unison mode. There are also various de-tuned modes to fatten-up the sound and the obligatory Osc sync, which is great for searing and cutting leads and basses.

The Stack mode assigns voices 1-4 to Layer A and 5-8 to Layer B. To edit Layer B, it's as simple as pressing the 'Edit Layer B' button and as long as it's lit you know that the front panel is referring to Layer B. You can also edit both layers at once by holding the Edit Layer B switch until it ﬂashes.

The Split mode is also well implemented and assigns the voices in the same way, but this time you could have a string pad to the right and a mono bass to the left.

The split points are set by simply pressing and holding the Split A/B switch and hitting the desired key on the keyboard for each side of the split. We love the fact that you can access several different sounds from within one patch using these various modes in combination with controllers such as aftertouch or the mod wheel to fade in different layers or modulations.

The ﬁlter is a ﬁxed low-pass design based on the Curtis chip and it sounds great. It has a huge frequency range and can turn a soft bass into a hard lead with ease. There's a four-pole mode (which enables self-oscillation and sounds warm and phat) and a two-pole mode, which doesn't self-oscillate and has a more subtle character. It would have been good to have a high-pass as well but it's not included here. It's a shame that there's no ﬁlter input, either.

The ﬁlters are lush and precise, yet nasty. Sounds can get pretty grungy with high resonance/low cutoff levels, although you need to watch out for clipping. We also love how bright the ﬁlters open up as this enables sounds to really cut through a dense mix.

For bass sounds, the Prophet '08 doesn't get quite as round or phat as a dedicated monosynth but it's very respectable all the same. For gigging, this synth could easily cover all the staple analogue sounds from pads through to leads and basses.

The envelopes are also very versatile and snappy sounding (but maybe not snappy enough for some bass sounds) and both the ﬁlter and amp envelopes have a useful delay parameter that delays the onset of the attack stage. There's also a third freely assignable envelope (with over 40 destinations) which is a nice addition.

All in all there are very few drawbacks with this synth, especially when you consider what you're getting for your money. It sounds classy, has very ﬂexible (though sometimes confusing-to-set-up) mod routings and the eight-note polyphony allows several sounds to be stacked and split within one patch. The MIDI options are also very comprehensive, with most controls able to send and receive MIDI CCs, and you can even chain two Prophet '08s together to make a 16-voice monster!

The Prophet '08 is going to be the answer to many a keyboardist's dreams.