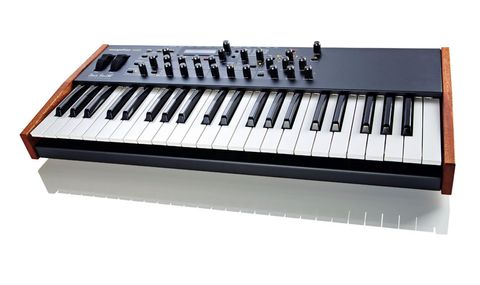 The extra octave and case are nice, but ultimately it's the familiar Mopho engine in the X4's case.

A year ago, we had the polyphonic Mopho X4 for review. It impressed us with its power, sonics and sub £1,000 price, and the new black livery gave it a somewhat classier look than the previous bright yellow Mopho module and keyboard.

Happily, the Mopho SE continues the Mopho X4's look and you'd be forgiven for thinking it's the same synth, except for the missing X4 logo and a change from Tempest style knobs to Prophet 12 style black/chrome knobs, which look more luxurious and feel more substantial. The sturdy wooden-ended metal casework is also the same as the X4 and feels very high quality indeed.

The success of the Mopho range has obviously spurred DSI on to offer Mopho models at several different price points to capture a wider market. They now have the Mopho desktop at around £250, the Mopho Keyboard and the Tetra both at around £550, the Mopho SE at around £700 and the Mopho X4 at approx £950.

We think this is a wise move by DSI, though perhaps there's little need to have the Mopho Keyboard in the range now, especially as it uses a different case design and colour scheme to the X4 and SE, which must complicate manufacturing.

We also suspect most folks will prefer the SE's 44-note keyboard to the 32 notes offered on the Mopho Keyboard. The extra octave on the SE is a welcome addition in terms of playability and makes it a much better proposition as a controller. Also, despite the bigger footprint, the SE is still very compact and portable.

Like the Prophet 12, Prophet 08 and Mopho X4, the semi-weighted keybed (same length as a Moog Voyager) feels great. It responds well to rapid playing and the aftertouch triggers predictably. However, as we've said before regarding DSI's keybeds, the keys have quite rough front corners and sometimes you'll catch your finger on one, which isn't pleasant!

Other than this, we have nothing but praise for the keybed; it's a great length for bass, lead and most controller duties and it's fantastic that aftertouch is included as it opens up a whole other level of expressive control.

In terms of ergonomics, the front panel works well and the overall width is kept to a minimum by placing the pitch and mod wheels above the keyboard and not to the side. However, there are still compromises that we were hoping DSI might have addressed.

Whilst using the same front panel across the Mopho keyboard range is resourceful, it's also the Achilles heel of the instrument. Programming still entails a fair bit of menu diving. This has become even more apparent after extensively using the Tempest and testing the Prophet 12, both of which have very intuitive front panels that flow superbly with little menu diving.

We still have to do too much head scratching to set up mod routings/ sequences on the Mopho compared to other boards such as the Moog Little Phatty and Waldorf Pulse 2, and the whole ecosystem is too screen-centric when dealing with mod routings, LFOs, the sequencer and arp.

Also, we're not fans of the shared envelope controls and prefer separate envelope controls for filter and amp at least. With the space left on the right of the front panel, maybe the next Mopho can gain a P12/Tempest style interface, though of course the space is handy for accommodating a Tetra, Mopho module or any other small items you might want to use such as a Kaoss pad, particularly as there are no built in effects.

Talking of sound engine, the SE's architecture is the same as the Mopho module and Keyboard (and the X4, but that's monophonic, not polyphonic). There are two DCOs with saw, tri, saw-tri and variable pulse waves, (alas no sine) plus a sub oscillator per oscillator too.

The inclusion of an audio input for processing other equipment through the filters and envelopes is a real bonus over the X4 and expands the Mopho SE's sonic palette, turning it into an excellent processor for anything you want to feed through. Another great thing is that you can add other Mophos, a Prophet 08 or a Tetra to expand polyphony using the polychain output.

You could start off with the Mopho SE and add a Tetra for five voices total, or shoot for the X4 from the start and add from there. We like this modular approach that allows your Mopho to grow with you, but keep in mind it's still cheaper to buy a Mopho X4 rather than a Mopho SE plus a Tetra.

Although the Tetra has some advantages over the X4 - in particular the fact that it can run as four independent monosynths on separate MIDI channels (ie it's multitimbral). All things considered though, the SE is a good board from which to grow your Mopho tree as funds allow.

It's no surprise, considering the sound architecture is the same as all the other Mophos, that the SE sounds the same. The overall Mopho character is well defined and upfront, though it can also do warm, smudgy and juicy, particularly with the powerful self-oscillating resonance of the four-pole filter. The Mopho SE can also nail most classic monosynth sounds and the tuning is very stable due to the DCO architecture.

The 'oscillator slop' function adds a bit of vintage style unstableness, but even with this engaged, there's still an inherent stability in the sound of DSI's DCOs which is great, yet slightly limiting too. Even when it's really pushed, the Mopho is still on the well-behaved side of dirty!

The audio mod and feedback parameters certainly help dirty things up a lot, but the VCO designs in Moog Phatties and the DCOs in the recent Waldorf Pulse 2 definitely have a little more mojo/soul to our ears.

So what's the conclusion? Well, the Mopho SE is a great sounding synth with a versatile complement of features and mod routings. It's already a highly respected synth engine, which is superb for phat basses, leads and effects and the sequencer and arp are very powerful. It's certainly sensibly priced as well, and you get a lot for your money.

If you're considering the Mopho Keyboard then we would definitely jump for the SE instead considering the small extra outlay - it looks classier and the extra octave is indispensable. We can also see the SE being a big hit as a live keyboard as it's very transportable and it sounds killer over big systems.

However, despite the improved keyboard and case design, it feels like the SE could be the last stand of the current Mopho engine, and something more exciting might be around the corner. So, whilst the Mopho SE is certainly 'bigger' it's definitely not 'badder'. It's simply a repackaging of a solid-sounding five-year-old design, though the interface in particular is now starting to show its age next to DSI's own Tempest and Prophet 12.