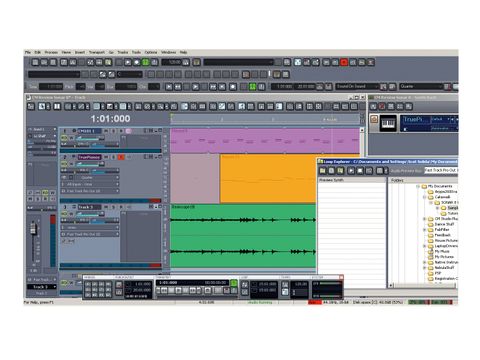 Sonar continues to improve, though some of the main improvements in version 8 are under the hood.

With the Sonar 8 update, Cakewalk has chosen to steer clear of sweeping changes and grand gestures in favour of refinement and polish.

That's not to say that there isn't enough here to warrant the pricetag. Some of the improvements (Instrument Tracks, for example) have been a long time coming, while others (such as those to the audio engine itself) may go unnoticed until you need them.

Two of Sonar 8's most significant changes are directly tied to the user interface. The first is the new Loop Explorer 2.0, which gives users a browser through which audio and MIDI clips may be located, previewed and dragged into the arrangement. If your music is built around loops, this will be a time saver.

Another (and, to our minds, far more crucial) addition is the Instrument Track. While we've gotten used to needing a pair of tracks (one for MIDI, one for audio) for each virtual instrument we open, we've wondered why it was necessary. Cubase users got an instrument track some time ago, and we've envied the lack of clutter.

Now Sonar users can open an instrument using a similarly dedicated track. Once you've done this, deleting the instrument results in the track being automatically split into separate audio and MIDI tracks, preserving any MIDI data and audio effects along the way. You can also split the Instrument Track manually - a thoughtful touch.

Sadly, though, Cakewalk Arpeggiator is out for this sort of track because, despite the audio FX Bin being available to Instrument Tracks, you can't use MIDI effects plug-ins with them.

Many of the most significant changes in Sonar 8 are not apparent upon first (or even second) glance. Cakewalk has made a concerted effort to optimise the performance of the audio engine and even the graphics - a welcome improvement after we took them to task about some graphics bugs last time around.

The annoying 'flickering' that once plagued the DAW's visuals (especially when resizing windows) has been rendered a thing of the past. The graphics are snappier and cleaner, launch time has been reduced, and the metering is now more precise.

Vista users in particular will be pleased that Sonar 8 has been optimised for that particular system. Some improvements are particularly noticeable on 64-bit systems. Latencies on X64 machines are no longer substantially higher than on X86 boxes, as was the case in past versions.

Fortunately, these tweaks don't come at the expense of CPU cycles. If anything, this version seems to use less processing power. This translates into better audio performance, lower latencies and fewer dropouts. We'd grown used to Sonar's audio engine periodically grinding to a halt, but we encountered no such stalls this time around.

That isn't to say the audio is entirely glitch free, however. There are still brief moments of silence while changing loop points on the fly.

Worse still, when we tried to normalise a file while the audio was playing, the resultant clip was ridden with glitches (though fortunately this doesn't occur when normalising offline). Cakewalk is aware of the bug and is' working to sort it out.

On a positive note, we were thrilled to discover that changes made to the audio driver settings no longer require a restart to take effect. Though most users will never actually make such changes mid-flight, it was always a drag for those who needed it.

Some of Sonar 8's additions and enhancements finally bring it up to speed with its competitors. We've always wondered, for example, why you couldn't arm recording while the audio was playing or recording, allowing audio to be punched into a track on the fly? It saves disk space and helps keep the creative juices flowing. Tape decks and competing DAWs allow it and now, finally, Sonar does too.

Users of previous Sonars have also levelled complaints at Cakewalk's ASIO implementation. It used to be that ASIO devices were occasionally stopped and restarted upon engaging the transport. Thankfully, now that this problem has been remedied, ASIO devices are always running.

Sonar users looking to integrate their DAW with external hardware will also be pleased to know that Sonar now enables the assignment of audio to mono outputs. This makes it a snap to apply a favourite vintage processor or mix tracks in a hardware mixer for some of that old time analogue mojo.

As if that wasn't enough, Sonar 8's new Clip Selection Groups function enables clips to be grouped together and edited as one. You can group selected clips or you can automatically group together any clips created by any multitrack recording.

Both Sonar 8 Studio and Producer Editions offer a wealth of high quality processors. All your old favourites are still here, but now the collection has been augmented with some serious axe-slinging firepower.

Included in the Producer Edition, a stripped-down 'LE' version of Native Instruments' Guitar Rig 3 offers a vast palette of guitar processing power, with three amps and cabinets, nearly a dozen effects, a built-in tuner and a slightly redundant metronome among the features included.

Additionally, the Producer Edition includes the TL-64 Tube Leveler, a fully automatable dynamics unit designed by Gallo Engineering, who are behind the Studio Devil guitar amp sims that have garnered much acclaim.

Cakewalk has utilised the linear-phase technology found in its LP-64 EQ and LP-64 Multiband plug-ins to fuel the new TS-64 Transient Shaper. This seemingly innocuous little delight gives you full control over the transients of the incoming signal. You can change the attack and shape characteristics with a few simple controls.

Finally, both packages include a brace of Channel Tools that provide control over the left/right channel placement, gain and phase. You can use them to decode mid-side recordings or narrow (or widen) the stereo field.

Cakewalk has delivered some serious new sonic firepower in Sonar 8, though major additions are, predictably, exclusive to the Producer Edition.

We can detect the work of Z3TA+ creator Rene Ceballos in Beatscape, a groovy gubbin that combines loop-slicing and a 4GB collection of loop construction kits into a percussive powerhouse that resembles Akai's MPC grooveboxes.

Samples are assigned to any of 16 pads, which can each be edited and have effects applied. Designed to be played live, you can trigger samples from the GUI or your MIDI keyboard.

No mere ROMpler, Dimension Pro is a fully kitted-out wavetable synth with flexible modulation and stunning filters. It's a humdinger and no mistake.

Finally, the Producer Edition comes bundled with a version of 4Front Technology's gorgeous TruePianos. This, the 'Amber' model, combines samples and physical modelling to create a stunningly real grand piano with seven variations. It's really something to play and hear.

A glance at the feature list and the included plug-ins makes it obvious that Sonar remains the most complete Windows PC DAW on the market. This makes Producer Edition (and indeed, the cutdown Studio Edition) a no-brainer for first-time buyers, assuming they're happy with the somewhat dreary user interface.

Given that previous versions have been so complete, however, users of Sonar 7 might not be so willing to pony up the upgrade fee, especially considering that so many of Sonar 8's improvements lie hidden beneath the surface.

Those who do decide to hand over the cash though, will find that the program they love is now zippier, friendlier and far less demanding. Another good showing from Cakewalk.

For a more in-depth review of Sonar 8, check out issue 132 of Computer Music, on sale now.

Listen to some of Sonar 8's new plug-ins in action: