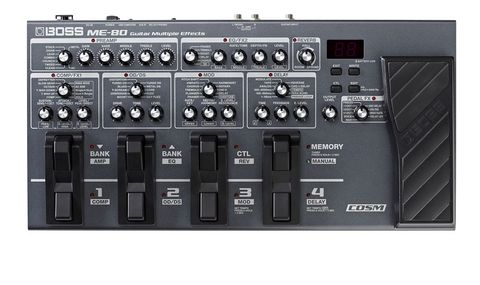 An affordable do-it-all effects solution for onstage use and recording.

This latest Boss multi-effects made its debut at Winter NAMM 2014, and is a more tactile unit than the menu-driven GT-100, with effects selections and parameter adjustments made using a huge array of front-panel knobs.

Battery or adaptor-powered, it features a set of ingeniously designed footswitches that can be used in two ways: either to switch a collection of individual effects pedals, or for instant recall of complex patches featuring multiple effects.

The patches are constructed from up to eight simultaneous effects, including, if you want them, COSM amp sims. The actual range of onboard effects is really wide, featuring all of the standard stuff you would expect, plus some new things such as Boss's Tera Echo, which incorporates Multi Dimensional Processing (MDP) technology to create a range of ambiences.

The ME-80 also has tap tempo, tuner, a phrase-loop function with 38 seconds of recording, and a built-in USB audio interface for recording to a DAW that includes the possibility of recording a dry sound while listening to the ME-80's effects, and then re-amping it later.

There is really nothing complicated about the ME-80, but don't let that fool you - it's packed with excellent sounds, and its impressive array of rotary switches and knobs make it easy to assign effects and tweak parameters.

However, if you prefer, you can connect it to a computer to access the Boss Tone Studio application, which provides a graphical interface for tweaking and archiving the ME-80's effects. An internet connection will let you access Boss Tone Central for direct access to free patches created by professional guitarists.

There's complete flexibility in how you use the ME-80 onstage. In manual mode, you have footswitches to access individual effects, but you can switch between that and memory mode with the eighth footswitch.

Doing so will reconfigure the footswitches so you have four for the presets in a particular bank, while the others select the bank and a control function, which is assignable in each patch for toggling grouped effects on/off, or for real-time adjustment of a specified parameter.

The pedal treadle can be used for foot volume and pedal effects like wah-wah and Whammy-like octave shifts, or you can use it to control selected effects parameters for some expressive real-time sound shaping.

With eight footswitches rather than four, the ME-80 is a massive step up from its predecessor in the Boss range, the ME-70, and is effectively a complete and comprehensively equipped pedalboard. There are some really nice-sounding effects on offer here, and they're all wrapped up in an easily operated and relatively compact unit.

Versatile and extremely practical, the ME-80 may be just the thing for anyone who wants to put together a whole effects solution in one go: and with street prices at around £229, you'll be getting superb value for money.