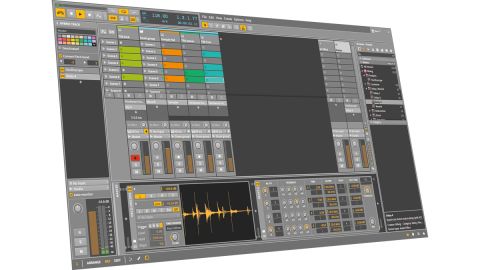 Bitwig continues to refine its workflow and identity, and keeps getting stronger as a result.

Upon initial release last year, Bitwig Studio found itself constantly examined and rated in direct comparison to Ableton Live, which - given their similarities - was somewhat inevitable.

In broad terms, both DAWs escaped this head-to-head with their dignity intact but, in the 18 months since, the challenge has fallen to Bitwig to establish its own identity. The two free 'point' updates that have emerged since we last tested Bitwig have both seemed intent on addressing this, while at the same time fixing a few notable omissions from the original release.

Version 1.2, Bitwig's most significant update so far, has been available as a public beta for several weeks and is now a free download to all registered users. Perhaps its most notable additions are ones that seem to be plugging holes that were there at launch.

There's the welcome addition of Group Tracks, which makes the process of creating busses and mixing similar elements far simpler and more fluid - at launch the easiest way to do so was to send multiple tracks to one Effect send.

Similarly, the new ability to set up project templates has likely been widely requested by users since initial release.

It would be unfair to write off all the updates as mere 'fixes', however, since in many cases the manner in which they've been implemented ties in nicely to the sense of 'openness' that is rapidly becoming Bitwig's calling card.

Project templates, for example, aren't merely combinations of track routings and devices, but can also contain unique MIDI controller mappings. Similarly, Group Tracks go beyond standard buss functionality by being able to incorporate their own send tracks and multiple MIDI parts, and be saved as bundled Meta Clips.

The open and flexible way Bitwig interacts with the controller market is one of its most unique features, and v1.2 adds into this further with support for Multidimensional Polyphonic Expression, and native support for the Roli Seaboard and Roger Linn LinnStrument.

While this kind of MIDI control is still something of a niche concern, it's a good indicator of Bitwig's commitment to being at the forefront of controller implementation, and ties in well with the DAW's already excellent Unified Modulation System.

There are other welcome tweaks elsewhere. The new tag-based device browser with its audition function works great, and makes finding devices a very smooth process. There's a new four part Delay device too, which is a strong addition to the built-in arsenal.

Several existing effects have been updated with dynamic displays, and there's a new Oscilloscope device (although we'd still like a spectral analyser along the lines of that in Live's EQ Eight). Bitwig now supports high-DPI/Retina displays too.

It might not be an earth-shattering update, but Bitwig continues to refine its identity, and we like the direction it's moving in - this is the sleekest version of the fledgling DAW so far, and we look forward to seeing what comes next.