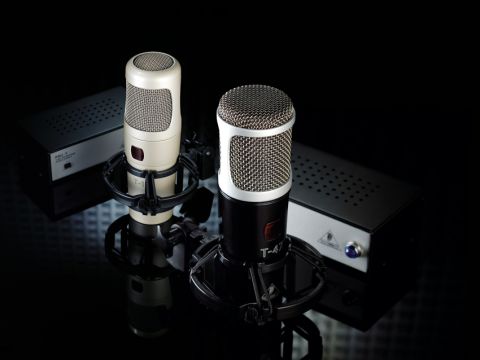 Very affordable valve mics that you could use for a variety of applications.

There's a certain mystique about valve mics that has ensured that they remain objects of desire among recordists. From the giddy heights of vintage classics like the Neumann U47 and AKG C12 on down, there are a slew of less expensive options to whet the appetite.

None, though, less expensive than the two just released by those Teutonic touters of affordable audio gear, Behringer. If you have about £150 to spend (less if you shop around) you too can be the proud owner of one of its two new valve mics. But are they any good?

Behringer's two models are the T-47 (£148) and the T-1 (£160), the difference between the two being their cosmetic design (the T-47 is black with a grille design that bears a passing resemblance to a U47 while the T-1 is silver, fatter and heavier) and that the T-1 adds a 20dB pad switch to the equation.

Although looking a little flimsy at first glance, the suspension mount is a practical design and does hold the mic firmly in the desired position once the tightening knob is finger tight. There's about 30 feet (10m) of cable connecting the mic to its power supply allowing you, if you find it more convenient, to keep the power supply in the control room and run the cable through to the vocal booth or live room.

The power supply houses the low cut filter switch and a ground lift switch in case you do run into any hum problems and, obviously, an XLR output to connect to mixing desk or preamp.

"These mics could certainly be described as having a warm sound - smooth with plenty of body but not over-endowed with top end."

With power on you can see the 12AX7 valve glowing through a tinted window in the mic body and, given time to warm up, it is ready to use. These mics could certainly be described as having a warm sound - smooth with plenty of body but not over-endowed with top end.

Compared in an A/B test to a more expensive AKG SolidTube, the Behringers lacked some of the top end zing but still turned in decent results recording an acoustic guitar. On a guitar cab, the sound was captured with great accuracy and male vocals were recorded with a flattering sound, rich in low end.

While there was little sonic difference between the T-47 and T-1, the pad switch on the T-1's body does make it a more useful all-rounder in that it can handle higher SPLs. Behringer see it as being a good kick drum mic and the bottom end response is solid so there is no reason, with the pad engaged, that it couldn't take its place in front of the kit.

OK, the naming is a bit cheeky - these are not Neumann U47 clones but neither are they rubbish. If you are looking to expand your mic collection by adding a valve mic, these two offer that option without breaking the bank. Both are capable of producing good results on a variety of studio tasks, but the pad switch on the T-1 gives it the edge in versatility.