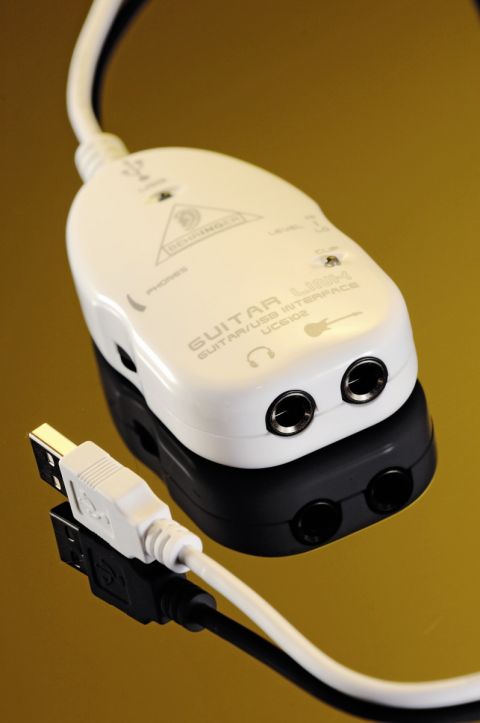 The least expensive way to get a computer-based practice and phrase training facility.

Several companies offer products that eschew the conventional hardware audio guitar interface in favour of direct connection to the computer, with the actual interfacing that does the analogue to digital conversion being built into the connecting cable or the guitar itself.

The Guitar Link is a 1.5 metre USB cable with an appendage about the size of a mobile phone on the other end with a guitar input and headphone socket plus headphone volume control and a switch to set the input level to compensate for guitars with high outputs.

Operation couldn't be simpler, really - you just plug the USB end of the cable into a computer, connect guitar and headphones at the other end and get on with it,

You get all three with the package and can use all for a trial period of 30 days but only get to keep one of them permanently after that period so, at that point, you have to make the choice of whether you want a Vox, Fender or Marshall-alike as your virtual practice amp.

One feature that all three guitar combos have may be the most important of the lot and that is the 'Tapedeck' facility as found in the Guitar Rig software.

Tapedeck allows playback of audio files - with the usual phrase training facilities of tempo adjustment - for half-speed playback without changing the pitch, plus transposition and fine pitch tuning if needed.

Behringer supplies eight short mp3s of typical guitar playing in various styles, but you can select any songs lurking on your hard drive in mp3, .wav or .aiff format for playing and looping. Also included is a basic metronome and Kristal 16-track music production and Audacity editing software.

As a guitar the Centauri is an entry-level instrument, but it is well put together with no obvious flaws in either hardware or finish. Straight out of the packaging it is playable, but set with a high action that could obviously benefit from a touch of adjustment.

The sound from the three pickup configuration is distinctly Fenderish with familiar sounds available at each of the five selector positions. Not bad at all, and poky enough through an amp for the guitar to hold its own in a band rehearsal situation when not plugged into a computer.

As for that USB connection, the UCG102 exhibits very little in the way of latency delay and the experience of playing through a computer feels very natural with the sound of the pickup cleanly converted and a nicely produced sound coming back at you.

The Guitar Combos software provides three distinctly flavoured and very playable amps, each with just the right amount of effects onboard to dial up a wide range of conventional sounds.

Each combo comes with 32 factory preset patches (plus 32 user storage spaces) selected from a menu that appears on the speaker grille, and these provide instantly familiar tones for rock, blues, pop and several other styles.

After 30 days you are left with just one of the NI amps but if you do need more sounds, the Guitar Link provides a universal USB connection that will happily work with any of the other amp simulation software on the market.

However, with any of the Guitar Combos, anyone learning to play would have instant access to a much wider range of sounds than with a bog-standard practice amp.

If you have a computer and are yet to sample the delights of plugging in your guitar, the UCG102 is probably the most cost-effective way to get started. For less that £40 you will be getting a very effective phrase training and practice facility with a decent-sounding virtual amp - no complaints at that price.