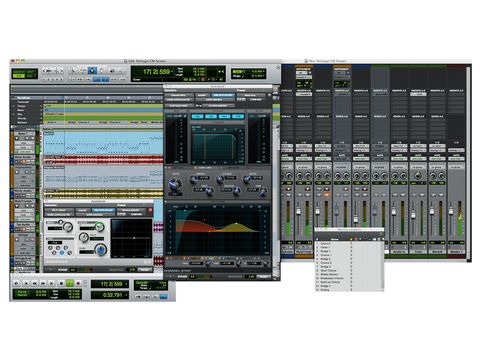 The upgrade fee is a little hard to swallow, but taken on its own terms, Pro Tools is still awesome for recording and mixing.

For over a decade, Pro Tools has been a fixture in professional music studios around the world. It is a complete audio recording, editing and mixing software package, with a range of suitable hardware options also available.

As with all modern DAWs, you can make any kind of music with Pro Tools, and it includes a useful selection of virtual instruments plus more than 70 effects processors. It also has good MIDI and notation-editing features.

Track counts have been upped for v10, which will play back up to 96 tracks at 44.1/48kHz and can record up to 32 tracks simultaneously if your interface has enough inputs. It also provides up to 64 virtual instrument tracks, 512 MIDI tracks, 160 aux tracks, 256 busses and one video track.

While almost all DAWs nowadays are suitable for recording instruments, bands and singers, Pro Tools is preferred by many for these tasks since it is simpler and more straightforward to use in many ways.

There used to be major restrictions to getting going with Pro Tools: you couldn't buy the software by itself, and it would only work with Digidesign or M-Audio hardware. But with v9, introduced a year ago, Avid lifted these constraints.

The most useful new feature is Clip Gain. Note that what were formerly referred to as 'regions' in Pro Tools are now called 'clips', and the Region menu has been renamed accordingly.

Each clip can have its own gain setting, independent of the track volume, automation settings or whatever. At the bottom left of each clip, you can display a small fader icon by selecting Clip Gain Info from the View menu.

Every clip has its own gain fader and the waveform will look bigger or smaller when you raise or lower the gain, which is great visual feedback.

You can display a Clip Gain Line on each clip, selectable from the View Menu, and just use the trim tool to drag this up and down to set the level. Clip gain settings can also be automated by setting breakpoints on the Clip Gain Line using the Pencil tool.

This is a big deal for those working with real recordings, especially things like vocals, as you can make each phrase or even each word into an individual clip, then conveniently adjust its level to make the entire vocal 'sit' properly in the track.

Lots of technical enhancements make Pro Tools 10 much more responsive to use, and generally speed up the workflow. Sessions open faster and fades are now calculated and played back in real-time, so there's no more waiting for them to get re-built.

Automatic Delay Compensation (ADC) now has four times the number of samples (16,384), so you can pile on more latency-inducing plug-ins. You can also record and play back using different bit-depths within the same session, work with interleaved stereo files, use 32-bit floating-point files, and import WAV, AIFF and SDII files within the same session without converting to the session format.

Plug-ins are now referred to as Native or DSP, and there is a new (64-bit ready) plug-in format: AAX (Avid Audio eXtension). This uses the same software code for both AAX DSP and AAX Native versions, meaning less work for developers (and the end of arguments over whether the native and DSP versions of a plug-in sound different).

Eventually, when the 64-bit version of Pro Tools appears, RTAS and TDM plug-ins will become obsolete and AAX will be the only plug-in format for Pro Tools.

Pro Tools can bounce a file and then import it directly into iTunes or upload it to SoundCloud, which could be useful when you need to share a work-in-progress.

You can bounce as an MP3, a 24-bit WAV or a number of other formats. If you use the bounce to iTunes option, Pro Tools puts the file into iTunes in the background, ready for you to play whenever you like.

The new Avid Channel Strip should be another crowd-pleaser for users, featuring EQ, Dynamics, Filter and Gain sections that use processing algorithms plucked from the highly regarded Euphonix System 5 console.

In action, the Strip was great for working on lead vocals, providing much better visual feedback and control than the standard plug-ins.

Everything looks better in HD

For large-scale projects such as film scoring, the more expensive Pro Tools HD10 software and its accompanying high-end hardware comes into play.

HD10 is specially designed to work with the new Pro Tools|HDX systems (or with Pro Tools|HD Native systems), but it can also be used with third-party gear.

The new Pro Tools|HDX card delivers up to five times more DSP per card and has over 1000dB of additional headroom, up to four times the track counts and double the I/O (with up to 64 channels of I/O per card) compared to its Pro Tools|HD Accel predecessor.

On the downside, the cost of a new HDX system is considerable, starting from £7559 for an HDX card with Pro Tools HD10 software.

HD10 also lets you load audio files into RAM for immediate responsiveness (as does Pro Tools 10 if you pay £1559 for the Complete Production Toolkit).

Pro Tools 10 is much faster to work with than previous versions - sessions open quicker and everything feels more responsive. Editors will love the new Clip Gain features, and all users will appreciate the new technical enhancements.

If you are working in post-production, this update is a must, with greatly improved control surface (EUCON) and worksurface (D-Command) integration.

Music professionals - for whom time is money - will value the workflow and speed enhancements, while serious production hobbyists can finally get to work with the same software used by the top professionals at a relatively affordable price.

However, as a full version update, v10 is not impressive, with no 'big' or innovative new features. Many of the additions (eg, Clip Gain) are things that we take for granted in many other DAWs.

That's not to say that they're not genuinely useful and valuable, but it feels more like it should have been a '.5' update, and so the upgrade fee seems excessive.