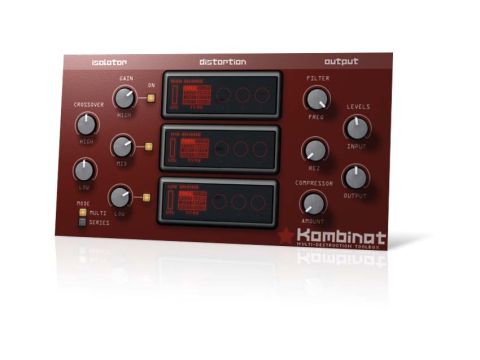 Audio Damage have done it again - Kombinat really is another winner, and comes with our highest recommendation

Taking its name from the Russian word for 'conglomeration', Kombinat is a three-stage sound-mangling powerhouse that's designed to, well, mangle your sounds. And this being an Audio Damage effort, there's no shortage of controls.

The first section, Isolator, is a simple DJ EQ-style signal-splitting module, with bands for high, middle and low. It comes complete with crossover controls and kill switches for all three bands (and like everything else in this plug-in, these respond to MIDI or host automation).

Next up are the real guts of Kombinat, housed in the Distortion section. There are three identical 'distortion engines', each offering a choice of seven different types of distortion. They're capable of producing lush, piercing or anywhere-in-between tones.

Each engine has its own controls and a thru/bypass function and, what's more, you can mangle each band independently. You can also flick the Multi/Series button to run the distortion engines in parallel or in series, with one feeding the next.

You have to hear this combination of crossover filtering and distortion processing in action to really appreciate its power, but take our word for it when we say that you can get some phenomenal - and quite unique - results.

Finally, we get to the output section, which offers a rudimentary low-pass filter and an even more basic compressor. However, in this case 'basic' only refers to the number of controls, not the range or quality of sounds it produces.

For instance, the filter is self-resonating at high levels, and if you use extreme settings, a kind of unusual gating effect is produced. We thought it was a really useful glitch until we read about it in the manual and discovered that it's intentional.

The compressor, meanwhile, is a simple one-dial affair, and makes for a nice way of phattening up the output of Kombinat.

Kombinat gives you highly usable sound tools the likes of which you won't find elsewhere. This plug-in can be used to give almost any sound an interesting edge, mangle it beyond all recognition or just help it squeeze that bit better into a crowded mix.

At times Kombinat sounds very digital, at others very analogue. It's a no-brainer purchase for anybody making any kind of electronic music, and would even be a viable distortion effect for guitarists.

Our only reservation regards the small and difficult-to-read display in the three-way distortion section. But since that's the worst we can say about an awesome piece of software, then it's fair to conclude that this is yet another essential plug-in from Audio Damage.

Hear Kombinat go to work on a loop: