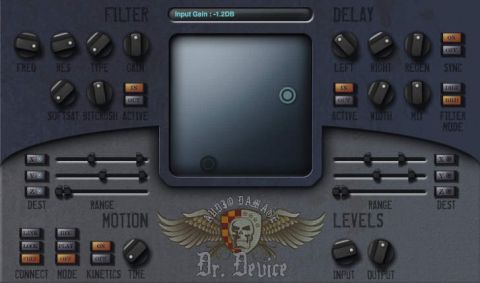 A stunning, original implementation of familiar concepts. Dr. Device should be a must-buy for all discerning producers.

Dr. Device is a combined filter and delay effect. You'll find the filter section at the top-left of the interface - this comprises the usual frequency, resonance and filter type controls (high-, low- and band-pass), and a few other nice touches too (such as a gain control, a bit-crusher and analogue-style saturation).

On the other side we have the delay section, offering independent left and right controls, where the delay of the right channel is determined by a multiplier in relation to the left channel (1:1, half-speed, double-speed, etc).

In practice, this works brilliantly. The feedback control enables you to set just one repeat or whack it up until the plug-in screams. The delay can be up to two seconds in length and can be synced to the host tempo for more coherent results, while a stereo width knob controls the channel balance from fully panned left or right, to both in the centre.

A standard wet/dry mix knob controls the balance of original signal to delayed signal. You can then choose from proper tape delay-style echoes that have marked top-end reduction with each successive delay, or a digital mode with a more gentle treble roll-off. But the best is yet to come.

The delay and filter sections are connected to a real-time performance matrix that enables simultaneous control of up to six freely-assignable parameters using two three-parameter controls called Nubbies.

This system uses an X/Y/Z matrix, where X and Y are the axes in a square control matrix and Z responds to mouse-clicks on the Nubbies.

It's almost impossible to explain how cool this is in words, but let's just say that with synced but random (or recorded) movements, automation and real-time hands-on control, it produces the most awe-inspiring evolving sweeps, textures, wah-wahs, delays and solidly-timed sonic mayhem imaginable.

Make no mistake, Dr. Device will blow you away.

So, here we have a plug-in that's a doddle to use and you can throw almost any signal at. The results that you get are at worst usable, and at best stunning and completely original.