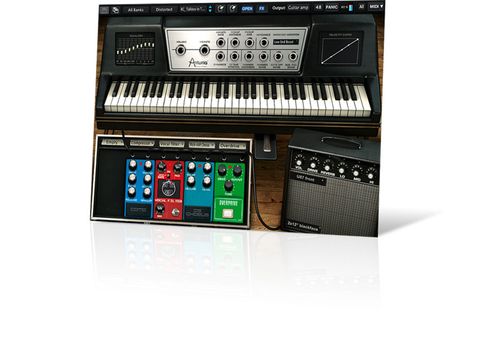 If you want a playable Wurlitzer emulation that both looks and sounds the part, step this way.

For many keyboard players, being asked to name a favourite electric piano is tantamount to a parent being pushed to nominate their preferred child. On the one hand, you've got the clean-cut, smoothly spoken head boy that is the Fender Rhodes; on the other, you'll find the slightly grittier, harder-edged (but equally high-achieving) Wurlitzer. It's a tough call.

The various incarnations of the Rhodes continue to have a much higher profile in the wider music world, so it's good to see Arturia throwing a dedicated spotlight on the Wurly - the Wurlitzer 200A, to be precise. Sound generation for the Wurlitzer V software is via physical modelling, so you're looking at a small hard drive footprint and fast loading times.

Running standalone or as a plug-in, the first thing that strikes you when you open the Wurlitzer V is how nice it looks. As with their other virtualisations, Arturia have chosen to make the piano look as real as possible, so at the most basic level you get a photorealistic representation of the 200A with volume and vibrato knobs on the front.

Going into Open mode, a more comprehensive editing panel is revealed: there's a ten-band EQ, plus a selection of knobs to adjust the likes of pickup distance/axis, impedance, dynamics, hammer hardness/noise and sustain pedal noise. You can also adjust the velocity curve to suit your keyboard and playing style.

The Wurlitzer 200A has been used by many rock acts, so it makes sense that Arturia have also included a set of 11 stompbox-style effects, four guitar tube amps and a rotary speaker.

"What really gives this instrument its edge are the effects and amps, which have been cannily used to create a wide and varied selection of presets"

Start playing the Wurlitzer V and the immediate feeling is that it's pretty responsive. With some emulations, the instrument's trademark 'bark' feels like it comes rather clumsily to the fore - but in this case, its presence is relatively subtle and increases gradually as you play harder. It's hard to say exactly where the Wurlitzer V stands in the league table when pitched against its rivals (or the original keyboard, for that matter), but it's certainly a contender.

What really gives this instrument its edge are the effects and amps, which have been cannily used to create a wide and varied selection of presets. You can browse these by banks (categorised by designer) or types (Dry, Classic, Distorted, Rock, Chill, FX, etc), and many of them demand to be played. You'll find classic Wurly sounds, artists' signature patches and more experimental tones. Ironically, there's even a Rhodes preset.

Overall, then, the Wurlitzer V is a lovingly crafted instrument that feels like it's designed for true keyboard players as much as producers. On the downside, the knobs and other controls can feel a little fiddly to tweak (though it's easy to assign MIDI controllers for those who want to get properly hands-on), but this is inevitable given the designers' desire to create something that looks 'real'. Some will prefer a keyboard plug-in that covers more than one electric piano, but for a bespoke Wurlitzer experience, Arturia's effort is hard to beat.