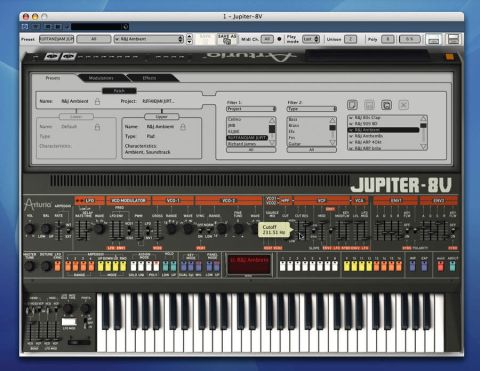 This one is right on the money. Jupiter-8 fans are going to love it.

Synthesizer aficionados have long desired a software emulation of Roland´s classic eight-voice Jupiter-8, and the original developers actually took a sort of sideways stab at it when they released their hardware-dependent VariOS-8 a few years ago.

However, this wasn´t terribly convincing. Fortunately for us, Arturia´s offering is a different beast. The company have already made a name for themselves with some cracking software emulations of classic synths, though it should be said that a couple of their recent releases have been just a touch disappointing. With the Jupiter-8V, though, they´re firmly back on track. This synth is a cross-platform, 32-voice instrument that can be used standalone or as a plug-in. And all the major formats are supported.

On the surface, it looks much like the hardware on which it´s based. It sports a pair of oscillators per voice, a dual filter design and standard ADSR envelopes. There´s a pair of LFOs onboard and, as you would expect on a modern instrument, some built-in effects processors. An arpeggiator has been thrown in for good measure.

These features can actually be found in any number of synthesizers, but the Roland Jupiter-8 wasn´t just any synthesizer. Even polyphonic instruments were a rarity in 1981, but the Jupiter went further still by being multitimbral. It was also one of the first synths to offer splits and layers across the keyboard, and Arturia´s emulation shares this ability. This enables the creation of deep, complex sounds that can be nothing short of huge.

In fact, even if you don´t do any layering at all, the Jupiter-8V is capable of some seriously massive timbres. If these aren´t enough, you can always use the unison function. This takes you from massive to practically galactic - trance fans are going to eat this thing up.

So the basics are all here, but it´s the little things that make the Jupiter stand out. You´ll find cross-modulation between the oscillators, for example, and you can also sync the oscillators for those ever-popular 80s leads. VCO2 can also be switched between normal and low-frequency modes. Plus, those oscillators offer six different wave shapes between them, including noise and modulatable pulse waves.

Once you´ve selected your waves, you can mix them and send them through the dual filters. You get a 6dB non-resonant high-pass filter and a low-pass filter with a selectable slope (12 and 24dB) and a resonance slider. Neither filter self-resonates - but neither did those on the real thing. The filter can be modulated by the LFO, keyboard and Envelope 2, in both positive and negative directions.

Simply, it´s superb. Arturia have outdone themselves with the filter. It sounds warm and alive and reacts smoothly to real-time tweaking. The Jupiter-8V´s modulation sources include the aforementioned pair of four-stage envelope generators and two LFOs, though you have to open up the Modulations page to get to the second one.

Once you have done so, you´ll gain access to the Galaxy module. This is sort of like an automated X/Y vector controller, but one in which the X and Y outputs are spun around on their axes (you can choose three destinations for each of these). The Galaxy module is an interesting and inspiring modulation source that´s a lot of fun to watch, too.

As you´d expect, there are loads of built-in effects: delays, reverbs, choruses and more. What isn´t so expected is the ability to plug effects in at various steps in the synthesis signal path; you can stick a chorus in after the oscillators but before the filters, for example. What´s more, effects can be modulated by a handful of sources, including the Galaxy module. Cool.

The Jupiter-8V is a bit special. Its sound is convincingly analogue (if a little ‘precise´), and there are enough new features to keep things interesting. We can´t say enough about the Galaxy module, and we wish all built-in effects processors were this flexible.

It isn´t perfect, though. We suffered a crash during the course of our review (though it was just the one) and then there´s the CPU consumption. On our 2.16GHz Core 2 Duo iMac it sucks up 6% of the CPU just sitting there. Playing a four-note chord can drive the CPU meter to over 26%, and you can double this for the same patch on our Athlon 64 3000+.

So, what we have here is a big synth with a big sound and a big appetite. Rest assured, though, that the Jupiter-8V is well worth the processing power. This is arguably Arturia´s best effort yet.