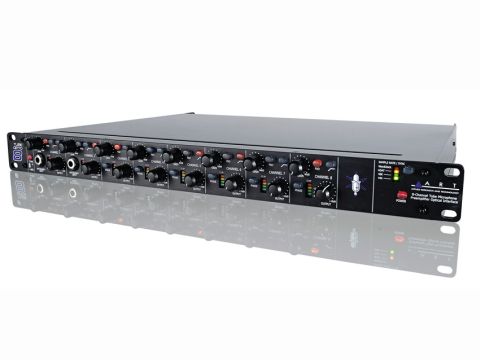 A very well thought-out and executed device that will certainly get the job done.

There are plenty of eight channel I/O devices out there at the moment, each offering slight variations on the same theme.

The TubeOpto 8 gives you eight channels of discrete Class A valve mic amps each with XLR and quarter-inch jack inputs and up to 64dB of gain. These feed the built in A/D converters which connect to the outside world via an ADAT eight channel optical output.

On removing it from the box our first impression was that it feels substantial. Its deep 1U rackmount case is robust and well finished. ART have gone for a simple black and white screen-printed design and although the front panel is quite full it's easy to read and get to grips with.

Each channel has two knobs, one for gain and one for output level. These feel reasonably firm and smooth in operation but quite a few did rub a little against the front panel, which is an annoyance but doesn't seem to affect their functionality.

It's the only obvious negative side of its Chinese manufacture as overall it scores well on build quality.

Each channel also features three switches for phase reversal, a high pass filter set at 80Hz and a pad switch, which operates on both the Line and Mic inputs. In addition to these channels one and two also have high impedance instrument inputs on the front panel.

At the extreme left are two phantom power switches, which enable channels one to four and five to eight respectively. Although this is perhaps done for reasons of cost or to save space we do prefer to see phantom switched individually on channels as this may dictate an illogical mic patch, or in some circumstances prevent the use of a ribbon mic or two in a mostly condenser setup.

To the right are the power switch and the sample rate/sync selector. This enables you to switch between 44.1kHz and 48kHz from its internal clock or to select external ADAT or word clock sync sources.

We set up the Opto 8 and having plumbed it into a RME MADI to ADAT bridge and given it sync from our master clock it was straight on to a bit of recording. In operation it couldn't be simpler.

First up were a nylon and a 12-string guitar mic'd with an AKG 414. Setting the output gain to the middle and then bringing up the mic gain it's easy to balance your record level. The valve circuit will clip if you push the mic gain hard but by pulling it back a little and then adjusting the output a healthy record level is quickly obtained and we liked the basic sound.

We know the combination of guitar and mic well and the Opto 8 gave us just what we expected.

We then DI'd a bass through one of the front panel instrument inputs. Again it was what we expected - a smooth bass response with enough punch to cut through.

As a final test we did a pass of shaker and tambourine. Good clean transient response and a smooth top end. Listening to the D/A we were pleasantly surprised. Good imaging and a clean response. Perhaps lacking a tiny bit in midrange detail but, as you can buy four of them for the price of the stereo D/A we were comparing it to, it's really not too bad at all.

We like the Opto 8. It's solidly built and no nonsense. A good deal of thought has gone into its design and although it is at the higher end of its price range it represents good value for money.