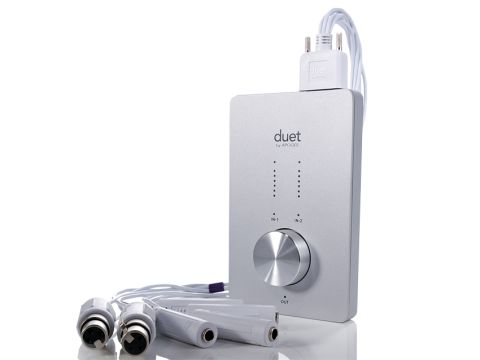 If you´re looking for a stereo audio interface to complement your Apple application of choice, don´t make a purchase without giving the Apogee Duet a try first.

The interface itself is tablet-shaped, with the only button or dial on the unit being the prominent rotary knob on the front. Above this, two LED ladders provide I/O status levels. Along the bottom edge, you´ll find a headphone port and phantom power ‘on´ LEDs for inputs 1 and 2, while the top edge provides the all-important FireWire port, which rests next to Apogee´s ‘break-out´ cable port. This cable provides two XLR microphone inputs, two 1/4” stereo inputs and a pair of stereo outs. Each connection is clearly labelled on the plastic moulding around each socket, so while this is a busy cable bundle, you won´t get lost.

Elsewhere in the box, you´ll find a FireWire 400 cable and an installer CD, which contains Duet´s driver, a ‘getting started´ QuickTime movie and supporting documentation.

Once the computer has restarted after installation, it launches the Maestro Control software automatically, which enables you to control the hardware outside of a DAW. The Control panel here provides drop-down menus to select XLR or line-level inputs, switches phantom power on or off for each input, controls gain and lets you group the two inputs together, for times when you´re recording in stereo. The mixer page provides graphical displays for input and output.

Maestro is provided principally for users wishing to make settings for non-Apple audio software, as it´s possible to control the unit from within the software if you´re a Logic, GarageBand or Soundtrack Pro user. How to go about this varies slightly from one software host to another but, in Logic, an Apogee control panel can be launched from the options menu, which again allows for pretty comprehensive control of the unit.

Alternatively, you can control input and output directly from Duet itself. Press the rotary dial once and you can dial in extra gain for input 1 by rotating the dial. Click again to control input 2. A third click controls the output level. You can even set four MIDI controller targets to be adjustable via the rotary encoder, making Duet something of a modest control surface.

The sonic quality of Apogee´s famous converters, allied to a super-sleek, compact design, should ensure Duet does well among the many Apple users looking for an audio interface to complement their studio or laptop computer. The choice of brushed aluminium case ensures that this is a very discreet box that blends in very well with any kit from Apple´s current computer range, while its technical integration is seamless.