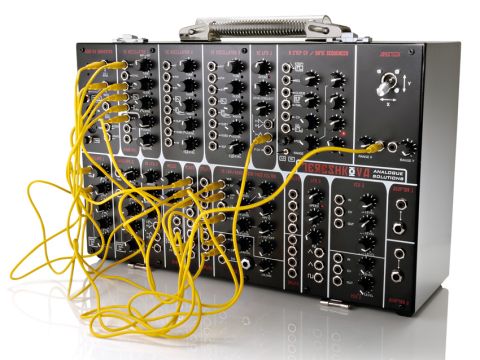 A serious amount of analogue goodness crammed into a highly portable format.

On the surface, Analogue Solutions' new Tereshkova appears very similar to the Vostok suitcase synth which arrived on the scene back in 2003. However, the Vostok has seen significant development since that original version, and the Tereshkova builds upon the latest version with an additional LFO and two more VCAs.

The suitcase design might make comparisons inevitable, but be under no illusions that the Tereshkova is a Synthi clone. This is an original synth with a sound all of its own.

The Tereshkova follows a semi-modular design, built into a surprisingly light steel suitcase with a removable lid. Connections are made via 3.5mm mini-jacks and the case has been designed so you can close the lid with the patch leads in place. Handy if you need to make a swift getaway half way through programming a sound, although we dread to think what customs would make of the Communist styling if you tried to carry this synth as hand luggage.

Firing the Tereshkova up, we put together a basic patch to get a feel of things. Our first impression was that MIDI-to-CV conversion is a little on the basic side. With only one controller CV output, you're restricted to either mod wheel or velocity. There's also no pitch bend or aftertouch, which is in keeping with the vintage aesthetic but limits your potential range of expression. A couple of extra outputs for the pitch CV and note on/off gate signals would also be nice here, given how much blank space there is on the panel.

It's no problem to split the signals up, but it uses up sets of multiples which could otherwise take care of something else. For a synth of this complexity, we'd also like to have seen a MIDI clock to gate converter for tempo-synced modulation.

VCO1 offers triangle, sawtooth and square outputs, while VCOs 2 and 3 ditch the triangle and offer pulse outputs with a pulse width modulation CV input for lovely creamy PWM sounds. VCOs 2 and 3 each offer three sub oscillator outputs: one, two and three octaves down from the pulse wave respectively.

"The Tereshkova follows a semi-modular design, built into a surprisingly light steel suitcase with a removable lid."

Once tuned, the oscillators are stable and the tracking remains consistent across a broad range of frequencies, but the lack of separate coarse and fine tuning knobs means you need the delicate fingers of a safe cracker to get all three singing in harmony. The absence of range switches on VCO2 and 3 means that if you want to jump up an octave (or down with triangle or sawtooth waves) you'll have to dial it in manually with the pitch control. The tuning knob on VCO1 can be pulled out to drop an octave but you'll inevitably knock the tuning out as you do so. A separate switch would be preferable.

The filter section is claimed to be based on the Korg MS20's 12dB/oct multi-mode VCF but to our ears it's not as harsh. The high-pass and low-pass sections are in series so they can be used simultaneously to create a band-pass effect but this means there are no separate outputs for the two sections. Cranking the Q control up to maximum allows both filter sections to be pushed into self-oscillation. It's a nice versatile unit but with three oscillators to play with we kept finding ourselves wishing we had another filter so we could really get some freaky sounds going.

On the plus side, CV modulation of the filter cutoff is effective and nicely adjustable, offering some seriously nasty effects when modulated with audio rate signals.

The versatility of the synth means that your options for sound design are incredibly varied. Two of the three LFOs can have their speed modulated by a CV signal, while the level knobs also function as pull switches to invert the sawtooth signal or switch between triangle and square waves. The output of the envelope generators can be adjusted or inverted, and there's also a repeat option to make the envelope loop.

In addition to the ring modulator and sample and hold circuits, the glide controls built into each of the oscillators also offer a neat way of creating interesting effects - adding a tiny hint of glide to one of a pair of otherwise identical oscillators creates a momentary detuning each time you trigger a new note.

The joystick controller is also a fun tool, allowing for great control of the filter. On a related note, we were a little disappointed to see that the VU signal meter, located below the joystick on the Vostok, has been omitted from the Tereshkova.

"The joystick controller is a fun tool, allowing for great control of the filter."

The eight-step sequencer provides a quick method of creating patterns, but whether the sequencer is an efficient use of the front panel space is another matter - we suspect many potential buyers would happily lose it in favour of a more fully featured MIDI-to-CV converter.

For us, the only major question about the Tereshkova is whether the sections which have replaced the Vostok's pin matrix are quite right. The extra features certainly improve the synth's scope but for us, three oscillators, three LFOs and three VCAs with only one filter section and one mixer seems just a little unbalanced.

Semi-modular synths offer a great deal of flexibility but the balance of features is crucial to their success. Ultimately, it comes down to personal preference; the Tereshkova offers a huge number of options and produces highly useable results despite our reservations about the specification.

The price may initially seem high but it's roughly on a par with building a similar system from modules and there's no doubting the convenience of the very well built suitcase format. With a whopping 96 patch points, it's as flexible as a Soviet gymnast but if you prefer the simplicity of the pin matrix routing system, the Vostok may just have the edge.

For us, though, the Tereshkova's extra LFO and VCAs make it the winner. We could happily spend a very long time tweaking sounds on this ultra-portable beauty.

Listen to what the Tereshkova can do: