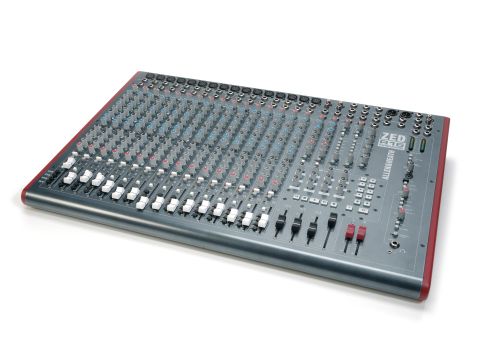 A very versatile mixer that would make the perfect centrepiece in a project studio.

Allen & Heath says that the ZED R16 is its first new true recording mixer in over ten years. That's not to say that the R16 is not suitable for live, but its versatility should see it sitting proudly as the nerve-centre in home, project and even small commercial studios.

Essentially, what you get is an analogue mixer with 16 fully-equipped input channels that can all be routed directly to the main left/right bus. However, there's also multi-channel audio send and return via FireWire and ADAT.

The internal soundcard has 18 FireWire inputs and 18 outputs (16 channels and the L/R buss) plus ADAT I/O for the 16 channels. Where a conventional analogue mixer would have more routing buttons sending the signal to a numbered group bus, the ZED R16 automatically digitally outputs the signal from each channel to the same-numbered channel on the FireWire buss or ADAT output.

This signal is taken directly from the mic preamp, but if you want to take advantage of the ZED R16's channel EQ, the digital signal can instead be sent post-EQ by a routing button next to the main fader.

Similarly, another pair of buttons takes care of routing back the associated digital output from the computer or ADAT to the ZED R16 channel either after the EQ or just after the preamp to take advantage of the channel's insert point and EQ.

How can it be used?

What all this means is that the ZED R16 can be assigned to multiple roles. The first scenario sees the R16 in use recording audio pre-EQ from an analogue mix - basically, the mixer can be used at a live gig with the EQ being utilised for the live mix outputted from the L/R bus while a pristine signal from each channel is recorded digitally.

Alternatively, in a studio situation the digital signal can be recorded post EQ with the analogue signal through the faders and L/R bus being monitored if desired. If it is preferred to monitor the signal actually being recorded in the computer, this could be sent back from the computer to the faders.

Another scenario sees the R16 being used as an analogue mixer but able to utilise a computer as an outboard rack by using the FireWire send and returns on each channel to route the signal through, say, compressor or gate plug-ins.

A similar but reversed situation would see the ZED R16's analogue mixing facilities applied to the tracks recorded on computer with the ZED R16 working as a summing mixer.

For those who prefer to mix 'in the box', the R16 could still be utilised for its MIDI control facilities. A whole section of dedicated user-assignable MIDI controllers is conveniently located in an area between the input channels and the master faders. MIDI data is sent on the FireWire buss, but there is also a MIDI Out socket to send messages to equipment other than the computer.

What you get is a standard set of transport controls for a DAW using the MMC protocol plus 12 rotary controls, four faders and 12 switches. In addition to the control section, each input channel has a Fader = MIDI switch that bypasses the audio at unity gain and enables the 60mm channel fader to output a Continuous Controller message.

Physically, the ZED R16 is about as solidly built as these things can be, with great attention to the small details and a work surface that is laid out with everything just where you'd expect.

Allen & Heath says that the ZED R16 is equipped with the best performing preamps in its entire range and, it has to be said that the sound quality is quite superb with plenty of clarity.

If you wish to keep the sound 'as is', the EQ section is switchable but there is plenty of scope for both broad and intricate tweaking with the very comprehensive EQ - two swept, fully-parametric mids, plus high and low-shelving EQ on each channel.

Four aux sends on each channel offer plenty of possibilities for various ways of working. The default setting of two pre-fade and two post-fade auxes allows for two foldback sends plus a couple of effects sends - a configuration that many users will be very comfortable with.

However, there is the possibility of changing the pre and post configuration of the auxes by putting link wires on the circuit boards - not as straightforward as having the switches on the panel but do-able if you need to.

Besides the 16 mono channels you also get four stereo channels. These offer no digital input or output but can be put to use as effects returns or perhaps to connect hardware synths.

A centre section offers a fairly comprehensive set of facilities for the small studio. There's a headphone socket plus its controls, provision for connecting and switching between two sets of monitors plus two sends for studio foldback with routing options for all four auxes and the L/R mix.

A built-in condenser mic provides talkback and there are two separate two-track connections.

The drivers for the ZED R16 are downloadable from the A&H website and are easily installed. Connecting the mixer to computer via FireWire makes all the digital ins and outs instantly available to your recording software, enabling ultra-smooth transfer of audio back-and-forth and opening up a real flexibility in working methods that is likely to endear the ZED R16 to many different users.

Versatility is the name of the game here - Allen & Heath has done its utmost to create a product that will have across-the-board appeal.

Great sounding channels, digital audio I/O, DAW transport control plus monitoring and talkback facilities have all been combined in a compact piece of gear that could be the essential central hub in your studio.