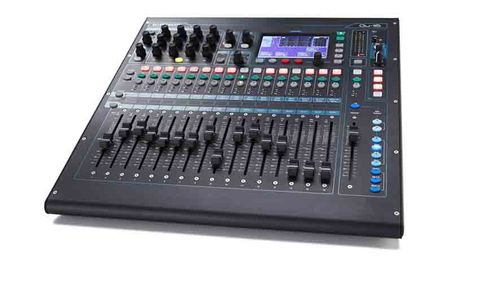 Offers an amazing feature set and high-quality sound in gig-proof housing at a truly affordable price.

The project live console market is currently seeing a wave of affordable innovations. The Behringer X32, released last year, incorporated an astonishingly rich feature list for its price. Now Allen & Heath's Qu-16 is taking it on.

The Qu-16 has evolved from a condensing of Allen & Heath's GLD and iLive series of professional flexible digital mixers and is housed in a very compact and rack-mountable console surface. It's solidly built, with a sleek modernist profile, and for a digital mixer there is a welcome population of knobs amongst the buttons on its upper half giving it a hands-on feel. Below that are 17 long-throw moving faders that are assignable to all sorts of tasks including the setting of the onboard stereo graphic EQs.

The ins and outs

With 16 mono mic/line channels and a further three stereo line inputs this is clearly aimed at the small gig world. Two of the stereo inputs are balanced jacks, the third is a mini-jack input for visiting MP3 players. That's it as far as inputs go; there are no external effects loops and there are no physical inserts.

All effects are onboard, of which there are four available, two as auxiliary busses and two as insert effects. There are four mono and three stereo mix outputs for independent monitor feeds as well as a main output for the Front of House send.

A very attractive feature of this desk is the wealth of expandability options including remote on-stage personal monitoring systems and remote audio connections using the proprietary dSnake output on the back panel.

The pros and cons

The control surface is laid out in an intuitive way and if you already have a grasp of the orthodox MO for digital desks, a quick glance to find the Select buttons and a few taps on the touch- screen will see you up and running in no time. The tactile 'analogue channel' knobs bring a reassuring feel and an alternative operational mode for the selected input channel.

The sound of the desk is, not surprisingly for Allen & Heath, of high quality with newly designed preamps based on their GLD series. There is one drawback, however - you can't name channels. Okay, you can write them on a strip of masking tape below the faders but what happens when you're on stage with your remote iPad controller app setting up monitors?

It's a memory test which you could do without in battle conditions. You can name them in the ME-1 Personal Mixers if you're using that expansion option but not in the console itself or the iPad app. While we're on the subject, the iPad app is a breeze. Once the desk is connected to the network the iPad sees the Qu-16 and from then on you can do anything you like from anywhere you like.

Navigating around the console views becomes second-nature very quickly. The Mix buttons on the right instantly flash the faders to their positions for that output so you can rapidly respond to demands for monitor changes. And there are FX send views as well.

Routing and muting are also a doddle, and you can assign a maximum of four Mute Groups which can be accessed with the user-assignable soft keys or from the screen Home page. Another major omission is the lack of either sub-groups or DCAs. You can link adjoining channels together but you can't have, for example, all the drum mics under the control of one fader.

The effects section is very good so not having the facility for external effects isn't too much of a drawback. Just having two auxiliary busses seems a bit mean but it does help to conserve DSP for other functions. For each of the four effects processors there's a big library of preset choices. Of particular note are the delays incorporating tap-tempo on the touch-screen.

Scene memory is comprehensively implemented with instant total recall of up to 100 scenes and with the facility to exclude assigned inputs and outputs from the recall if need be.

Direct-to-disk multi-track recording of all 16 inputs plus the stereo output is a huge draw for this level of mixer. Plug a USB drive directly into the top of the desk, set it recording at the start of the show and forget about it. No need for a fragile laptop perched on the side by the over-flowing pint.

Sadly USB keys are not compatible, only a pre-formatted disk is supported, but once you've got one you can re-use it and transfer files to your DAW in the safety of your studio. If you do want to use your laptop, you can still transmit the multi-track audio over USB to a Mac and play it back down the same channels.

The feature list in this unassuming but good-looking and sturdily-built creature is the sort of thing you could only have dreamed of a few years ago. Flying faders, direct to multi-track recording, touch-screen editing and remote mixing are the icing on top of the mixing and processing features within.

Not to mention the Allen & Heath seal of sonic quality. It really is amazing for the price and the expansion options such as the personal mixing systems and remote audio connections on a single Cat-5 cable make it even more attractive. Best of all, it didn't crash once during the days of testing.

But there are a few corners cut which perhaps shouldn't have been: the lack of groups or DCA faders; and perhaps more of a turn-off, the lack of channel naming capabilities, which is particularly annoying when you're in the crowd with your iPad and you can't remember which channel the lead vocal is on. If it wasn't for the fact that both these omissions are available on the Behringer X-32, we could probably excuse it. But then Allen & Heath has the reputation for quality and build that many others envy.