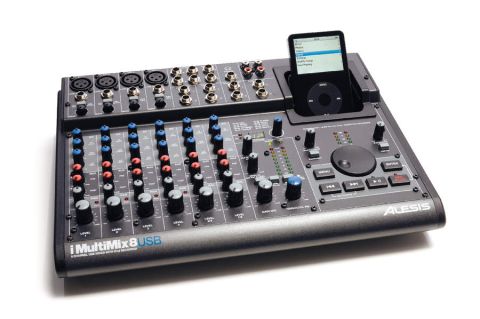 A supreme, turbo-charged mixer/recorder/audio interface for the clued-up iPod generation.

The iMultiMix8 USB is a box with many features, so let´s begin with a quick overview.

Firstly, there´s an 8-channel mixer, with four mono and two stereo channels (input strips 5/6 and 7/8). The mono channels can accept XLR microphone or line-level inputs, including guitars, with a ‘global´ phantom power switch provided for the former on the rear panel

Each of the six input strips features three fixed-band EQ cut/boost dials, two auxiliary sends, a pan knob and a larger-level knob. The second of the two auxiliaries enables you to access a range of 100 onboard digital effects, which are selected and blended in the master section.

Said section enables you to set independent levels for the Main and Control Room/Headphone mix outputs, while also letting you keep tabs on levels via standard stereo ladder LEDs.

The right-hand side of the top panel is where the main action happens, however. Here, you can dock your iPod in a specially-designed cradle and then control it from a series of buttons which mirror those on the iPod itself. These include the all-important Menu and Transport controls and an extremely handy Backlight button.

With these, you can use the mixer to make a direct stereo recording to your iPod, which then shows up as a Voice memo recording. When you´re finished, simply un-dock your iPod, connect it to your Mac or PC and there your recordings will be, in a dedicated playlist in iTunes, captured as 16-bit, 44.1kHzWAV files.

Don´t dismiss this as an iPod-only product however, as the rear-panel hints at yet more flexibility. A USB enables direct recording to your computer with the iMultiMix8 becoming an independent audio interface when used in this way.

So, what we have is a mixer, audio interface and recording/playback device in a pretty compact all-in-one package.

Design-wise, the iMultiMix8 borrows from Mackie´s range of mixers, with blue EQ controls and red auxiliaries. Certainly, everything is easy to find and operate.

Input connections are self explanatory, while the output options include dedicated Main and Control Room outs, with a separate two-track input/output stage. Crucially, you can also route a ‘playback´ iPod signal into the audio path at the two-track stage, which enables you then to send it to the Main or Control Room mix. One application for this could be the incorporation of a backing track into a live set.

Another neat feature is that if you connect a separate stereo source to the dedicated two-track inputs, this source is summed with that of the iPod, rather than one taking precedence.

If you´re more interested in recording directly to your computer than directly to the iPod, it´s the Main Mix which is sent down the USB cable, with returning audio coming in at the two-track stage for monitoring. Be aware that, as the input can be routed to the Main mix, there´s a risk of a feedback loop occurring while you´re recording!

The iPod has made its name as the definitive MP3 and AAC player, so it would be easy to assume that recording quality would be lower than on other digital media recorders. However, you have to remember that at the heart of an iPod is a hard drive like any other.

Accordingly, recording quality is excellent and the provision of EQs in the channel strip and a healthy range of onboard effects processing help to tighten and liven up a mix. The direct-to-computer USB recording facility further enhances this unit´s potential.

If you´re looking to record gigs, rehearsals, live sets or DJ sets - or add an audio interface to your studio or laptop computer setup - the iMultiMix8 offers a reliable and decent quality solution at a reasonable price.

For a more in-depth review of the iMultiMix8 USB, check out issue 198 of Future Music.