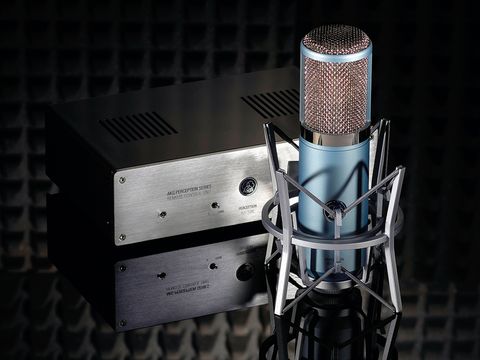 A great way to get your hands on a tube mic from a respected brand at an affordable price.

AKG's Perception range, which was launched in 2005 and includes the sub-£100 Perception 120, has just gained a new flagship model in the form of the 820. The two standout features are that the microphone has a tube design and that its polar patterns and other tweakable controls are located onboard a separate remote control unit.

Starting with the microphone itself, the internal design features dual 'back to back' 1-inch diaphragm capsules which combine with ECC 83 dual-triode tube circuitry to deliver the 820's warm tube sound.

The architecture is designed to enhance even-order harmonics which in turn form the backbone of a tube microphone's distinctive sound. The actual microphone has no on-body controls as, once it is connected to its control unit via the supplied seven-pin power/microphone cord, all setup is controlled from there.

The remote control unit itself is cast in classy silver and looks like a scaled-down high-end hi-fi amplifier, with a pleasingly minimalist front panel.

The prominent central dial here is used to control the microphone's polar pattern and nine detented positions are available, from omni-directional mode at the 7 o'clock position, through cardioid at noon, through to figure-of-eight at 5 o'clock, with intermediate positions available between these poles.

The other controls on the front panel include a -20dB pad switch and a bass roll off option which provides 12dB per octave high-pass filtering below 80Hz. As far as actually feeding the signal from the remote control unit to your audio interface or mic preamp of choice is concerned, a regular XLR cable is required, though you'll have to provide this yourself.

You'll also find a ground lift button on the back panel which will help eradicate hum if this is something from which your studio suffers.

While it's possibly almost too much of a cliché to use the word 'warmth' to describe a tube microphone, there's no other word to do the job better and it's certainly a quality the 820 oozes, with an immediately familiar comfortably smooth sound.

Don't be fooled into thinking that the sound it produces is falsely coloured or in some way 'too smooth'; what this mic does do is to provide a richness of sound, which is a lovely option to have up your sleeve in the studio. The nine polar positions provide plenty of choice and you'll find what you need to get a great sound almost regardless of the source you're looking to record.

This is a great sounding microphone that breaks the mould of the rest of AKG's Perception range. It's over twice as expensive as the previous top-end model, which is to be expected given the presence of the tube technology.

The only dilemma is where to put the remote control bearing in mind its bespoke connector - in the vocal booth with the artist, or in front of you and your DAW? It's a nice dilemma to have - this is a very good mic.