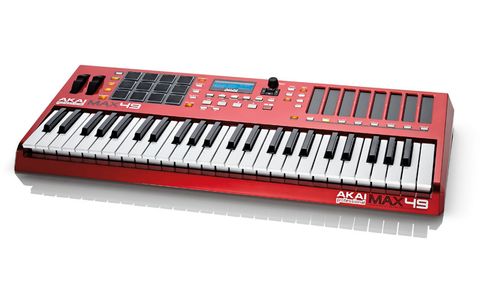 A feature-packed controller with its eyes on the past, present and future, all at once.

Akai's MAX49 controller might just be ready to herald in the next step in the evolution of the controller keyboard concept...

The words 'keyboard controller' used to be among the least sexy terms our industry had to offer - after all, what could be less inspiring than a keyboard with no in-built sounds, offering nothing but MIDI output to trigger our assorted soft synths?

Fortunately, such vanilla devices didn't last long as manufacturers began to understand that if we liked the idea of controlling note input from keyboards, we might get more excited if we could control other things too. Soon, we were banging out drums on pads, running our DAW's transport controls, and even tweaking plug-ins via sliders, rotaries and switches.

Akai's MAX49 controller might just be ready to herald in the next step in the evolution of the controller keyboard concept, then, as its remit is to go even deeper into the realms of remote control.

On the rear panel, as well as the bus-power enabling USB connector, you'll find MIDI In/Out ports, sustain pedal and two additional footswitch controls and, somewhat unusually, CV and Gate outputs to control any classic synths, newer desktop ones or modular formats - the CV operates over V/Oct. However, merely listing the physical controls doesn't do the MAX49 justice at all, as it's the scale of the control options onboard that proves most impressive.

In the box with the keyboard you'll find a manual and driver CD, the latter of which provides two programs - Akai Connect and the Vyzex Editor. Once installed, Akai Connect's job is to ready your chosen DAW for use with the keyboard, and it does this by offering a plug-in 'wrapping service' which prepares every available plug-in on your system for direct use with the hardware.

You can either wrap plug-ins individually or wrap everything in a single pass. Thereafter, it's simply a question of selecting your DAW's 'starting point' Program from the keyboard hardware. Once you've made the match, MAX49 is ready to take control.

Additionally, this keyboard is happy to talk the control surface language of both Mackie Control and HUI modes, so if you're keen to set it up to run your DAW via either of these, the keyboard is ready.

You might associate Arpeggiators and Sequencers with instruments which feature their own in-built sounds, but that hasn't stopped Akai including them here as triggers for MIDI events.

Sequences can be launched from the pads and it's great to see some real MPC-oriented tricks being employed, including a Note Repeat trigger option from a dedicated button. Performance is encouraged from the sliders too. Whilst these can be used to write automation in your chosen DAW, they can also be used to spit out data to control, for instance, LFO speeds within synths.

As you can tap to jump positions on each slider, it would therefore be possible to use these as a wobble-bass speed control, among many other performance possibilities, triggering those jumps on the fly. Speaking of both the pads and the faders, as there are Bank buttons for each of these, there is a total of 48 pad assignments and 32 potential slider targets, providing control over 80 parameters directly from the front panel as a result, which should keep you busy.

The acid test of any controller keyboard is the extent to which it encourages you to drive a project from it directly and forgo using your mouse. MAX49 passes this test extremely well; while its control set takes a little getting used to, this is only because it offers banks of control to allow a huge range of parameters to be tamed from its front panel.

If you spend a little time getting acquainted, you'll find your mouse becoming increasingly redundant. The keyboard offers a pleasingly firm action while it's great to have the back-lit pads respond musically too, complete with aftertouch control.

The increasing popularity of modern analogue synths, as well as the continued second-hand demand for synth titles of yesteryear, absolutely justifies the inclusion of CV/Gate ports, with the MAX49 ready to form a MIDI bridge between such devices and your computer.

One of the main purchasing considerations will be whether you're happy to use ribbon sliders rather than rotary encoders; compared with many competitors, Akai have taken the decision to drop the latter altogether.

Remember, though, the eight physical sliders actually drive 32 assignments via the Banks so, for us, it's a gamble which pays off. With an approach which encourages performance as much as it lets you take control, MAX49 is a winner. Can you make a 61-key version please Akai?