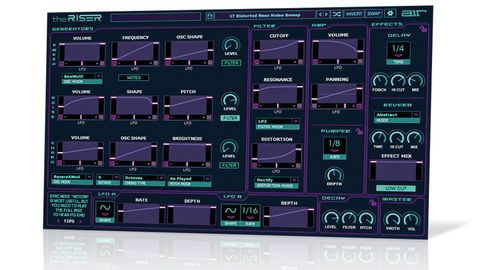 While not as flexible as a 'proper' synth, The Riser makes creating FX more or less quick and painless.

There are 18 identical and uninviting envelopes scattered around the interface, but after a brief period of acclimatisation, all becomes clear. Each envelope has just two parameters - start and end level - and you adjust the shape of the curve by dragging it vertically. Envelope duration parameters are handled on a global basis via MIDI input.

The Riser features three sound generators, the first of which is Sweep. This monophonic oscillator boasts Volume and Frequency (pitch) envelopes, plus an Osc Shape envelope that gives varying results depending on which of seven modes the oscillator is operating under. These include sawtooth and square oscillators with (hard) Sync, XMod (frequency modulation) and Multi (unison detune) options, plus pulse width modulation (PWM).

It's possible to make simple but useful effects using just the Sweep generator, and while there is obvious aliasing in the upper reaches of its frequency range, it's arguably sonically beneficial.

The second generator - Noise - is FM-based, which lends it a digital character and makes it capable of creating really cool morphing bell- and cymbal-like noises through playing with its Shape and Pitch parameters.

The third - Chord - is similar to Sweep, and offers the same seven voice modes. It doesn't have its own Frequency envelope but can be slaved to the Sweep Frequency or played chromatically. Dropdown menus are used to select octave and chord types, or you can play your own chords by sending MIDI data to the instrument on channel 2.

Despite the synth's beginner-friendly concept, then, it is actually possible to get quite deeply involved with it.

All of The Riser's Generators are stereo, and you can get perfectly usable sounds from them just by manipulating their envelopes. There's the potential to introduce more movement via the bipolar LFO modulation amount faders under each envelope, though.

Each one can be assigned to one of the instrument's two LFOs, the first of which can reach a fairly nippy 30Hz rate - audio- rate modulation isn't possible, unfortunately - while the second is always synced to host tempo, at a range of beat values from 1/32 to 2 bars.

The resonant multimode filter serves up 23 modes, though they're all pretty standard combinations of low-pass, high-pass, band-pass and all-pass types. On the effects front, you get Distortion, Reverb, Delay and Pumper (synced, sidechain-style ducking), and the ability to modulate amplitude level and pan position. The effects constitute a simple but effective set of tools that work with the noise generators to deliver a surprisingly broad sonic palette.

Finally, the large library of presets show off what the instrument is capable of, and provide the less technically savvy with plenty of tweakable material to get started with.

Hardcore synthesists are probably better off saving up a few more pennies for something more versatile and capable, but if you're just after an easy system for making climactic effects, it's hard to argue with what The Riser offers.