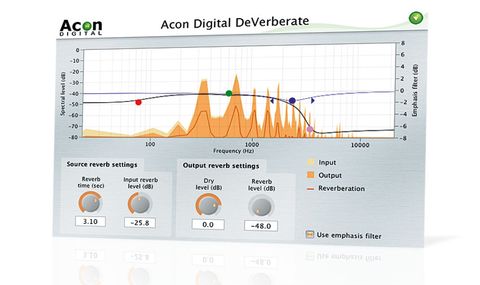 More successful on short sounds than longer ones, DeVerberate does a good job when used with care and consideration.

Acon Digital produces a small range of audio software, including the Acoustica audio editor and some affordable but effective restoration plugins. Attempting to pull off the once-unthinkable feat of reverb reduction, their latest cross-platform plugin, DeVerberate, then, is clearly one of its more ambitious ventures.

DeVerberate (VST/AU) uses a real-time algorithm to analyse a mono or stereo audio signal, separating the reverb from the "dry" sound and enabling you to rebalance the two. Thus, despite the name, it actually facilitates the increasing as well as decreasing of reverb.

Controls are divided into Source Reverb and Output Reverb sections, the latter fairly self- explanatory, with just Level controls for the reverb and dry signals. The Source Reverb section is where you prep the plugin by giving it the best indication you can as to the Reverb Time and Input Reverb Level of the source material.

Depending on the source, this can be initially confusing, as a fair bit of guess work might be involved. The manual suggests that the best way to do it is to set the output Reverb Level to minimum (-48dB) and the Dry Level to 0dB, then adjust the input Reverb Time to an approximation of the reverb decay time in the source signal, and finally bring the Input Reverb level up until you achieve the desired reduction.

DeVerberate's spectral display shows the input spectrum, output spectrum and estimated reverb profile. The reverb profile (red line) can be a useful visual aid for clarifying the reverb content as calculated by the plugin. If, having adjusted the input controls, you feel that the plugin isn't reading the signal correctly, there's also a four-band Emphasis Filter for manually influencing the analysis by frequency weighting.

Once you've got your settings sorted, DeVerberate works pretty well. As the reverb reduction increases, however, there's a corresponding degradation of the source signal too, until, ultimately, it sounds like the life has been well and truly sucked out of it. We found that with vocals, for example, the high-mid frequencies were the first to suffer. This is where the Emphasis Filter can save the day, though, as setting a negative high frequency curve helps to retain more of the reverb's top end, making the sound much more acceptable.

Having some idea of the reverb time in your source signal also helps (the parameter ranges from 100ms to 5s). Get this setting wrong and you may well find that more reverb breaks through than you want. For reverbs longer than five seconds, DeVerberate still works, but the reverb tail tends to reappear in quiet passages.

DeVerberate's simplicity is refreshing, and working within its apparent limits, you can get very good results. Percussive sounds suffer fewer obvious artifacts than rich, 'verby legato ones, though, and with the latter, you won't be able to remove as much reverb before the signal degradation becomes unacceptable.

So, DeVerberate tends to handle small to medium reverbs better than longer ones, and if you just want to tidy up short, isolated sounds, a gate can be just as effective. Some form of mute/ solo function for the two signal elements, or in/ out difference monitoring would expedite the setup process, as would a set of basic presets. Even so, DeVerberate does a pretty good job, is very easy to use and won't tax your CPU.