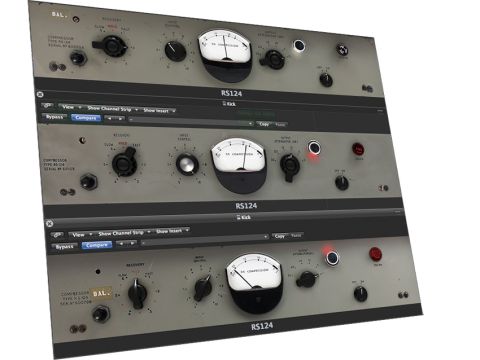 Yet another juicy, smooth and powerful addition to the Abbey Road plug-in range.

In the past couple of years, some of the custom-made gear developed through the '60s and '70s has been converted by Abbey Road's own software development team to allow us DAW owners access to the studio's classic gear. The latest of these is the RS124 compressor.

This valve model was the main processor of choice throughout the '60s and the plug-in version actually comprises three separate hardware models within a single GUI. So, is its sound still relevant 50 years on?

Once installed (after a quick download from Abbey Road Plug-ins' website and authorisation via iLok), the three models can be accessed by clicking the model number on the left. The three versions feature the same parameters for control but differ in function, and therefore sound, in a number of ways.

The hardware parameters are a Balance button, Recovery/Hold dial (which sets release time), Input Control, an Output Attenuator, a power button and a SuperFuse button, which brings new functionality not found on the original hardware. The Recovery/Hold dial features detented 'positions' that control release speed from Fast (position one) to Slow (six), with an adjacent red Hold position between these integers.

These Hold values were added to the original hardware to get around the problems of over-compression on short attack sounds, or to avoid unwanted ambient noises brought up in volume at the end of a compressed passage of music. If either the attack or release settings of a particular recovery time produced unwanted sounds, the idea was to manually switch the recovery time to its hold position to 'prepare' it for its relevant value by providing gain reduction without release. In the plug-in version, the same performance can be achieved with automation.

In action, the compressors are wonderful. They sound smooth and warm when set to longer Recovery times but can spank the daylights out of drum and percussive sounds too, particularly when the SuperFuse function is activated on the right-hand side. This sets the Attack and Release time to the same value to produce an over-compressed, punchy sound which works fantastically on any percussive material and which completely and magically removes any sense of 'subtle', which these processors otherwise contain by the bucket-load.

The three different model numbers contain unique sonic characteristics and are therefore capable of lending themselves to buss compression, as well as to processing individual track components.

They say that classic gear stands the test of time and to learn that the hardware units on which these plug-ins are designed are still in use on a daily basis at Abbey Road provides the proof. These compressors are as capable of doing a wonderful job today as they were when John, Paul, George and Ringo were famously negotiating a zebra crossing in North London.

Good compressors do so much more than control dynamics: they also provide a unique tonal character which can help lift the sounds they process to new heights. If this is what your mixes lack, we strongly recommend you check out the RS124.

Listen to the RS124 processing a range of material: