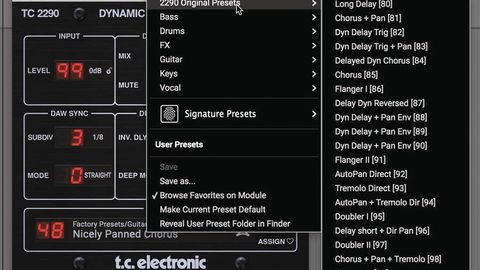 We love the TC2290-DT plugin, and the controller is quite cool, but the inextricable linking of the two is maddening.

Released in 1985 and discontinued 20 years later, TC Electronic’s TC2290 stereo delay rack unit stands as one of the greatest digital delay effects ever made.

A staple in countless recording studios of the time, as well as the effects racks of wealthy guitarists the world over (it cost around five grand), it still fetches high prices on the secondhand market today.

With the TC2290-DT plugin (VST/AU/AAX), TC has painstakingly recreated and modelled both the digital and analogue components of the classic rackmount, and taken the unusual step of teaming it up with a dedicated USB hardware controller. This is a small (109x135x43mm), solidly-built slab of metal and plastic that packs (almost) all the controls and LED readouts of the original 2290, plus input and output level meters, into a square form factor, and looks great doing it.

It’s important to understand that the controller is just a controller, rather than a DSP host for the plugin, which runs natively to the host OS - this definitely isn’t ‘the new PowerCore’ in any sense. However, the hardware also doubles up as the copy protection system for the software, due to the fact that the main controls - delay time, feedback, modulation settings, etc - aren’t actually exposed by the plugin GUI and thus are only accessible on the controller. The controller essentially is the GUI.

The actual GUI, meanwhile, houses the parameters from the rackmount’s ‘Special Keys’ mode - see Special forces. Without the controller attached, the plugin can’t be edited at all, although automation continues to work for up to two weeks (or until the controller is reconnected, obviously), so existing projects can at least play back correctly.

Setting parameters on the controller is entirely button-driven. Scroll through values with the various up/down keys, or type them in directly using the numeric pad; and step through subsections within a section (modulation sources, for example) using the Select buttons.

The delay time ranges from 0-9999 milliseconds, and pressing the Sync button snaps it to host tempo, the up/down buttons stepping through note values. Awkwardly, switching to dotted or triplet divisions requires a trip to the onscreen interface or use of the clunky Special mode (see Special forces). The delay time can also be set by pressing the Learn button repeatedly: the first press of every two initiates a count-up in value from 0ms, and the second stops it at the current millisecond value - non-averaging tap tempo, in other words.

As well as its titular control, the Feedback section features stepped high- (100, 200 or 400Hz) and low-pass (2, 4 or 8kHz) filters, and an Invert function for flipping the feedback signal, giving a different flavour for certain modulation-based effects.

On that subject, modulation remains a key feature of TC2290-DT, with cyclical and input- sourced movement of delay time, panning and amplitude applied in the Modulation Osc/ Threshold section, for the creation of chorus, flanging, phasing, auto-panning and dynamics- shaping effects. The onboard LFO outputs a sine wave or random values at up to 10Hz, but, surprisingly, doesn’t sync to host.

With all of TC2290-DT’s main parameters not only edited but also displayed on the controller, the plugin GUI is used only to negotiate the secondary ‘Special Keys’ layer of the original device. These parameters include Input and Output levels, Pan position, dry/wet Mix, input Threshold levels for the Env and Trig mod sources, and selection of presets beyond the 100 defined ‘Favourites’ addressed by the controller.

While the separation of these things from the main controller interface is perfectly acceptable (with the possible exception of dry/wet Mix, although at least that’s the default assignment for the Special Number parameter) the DAW Sync Mode selector, with which triplet and dotted note values are activated, should ideally be on the controller, next to the Delay Time up/down buttons.

Having said that, the controller can in fact also be used to adjust every setting in the onscreen interface, although doing so requires a series of Special Numbers corresponding to the parameters to be memorised or referred to, for entry via the key panel. This is such a faff that we can’t imagine a scenario in which it wouldn’t be quicker and easier to just do it with the mouse instead.

The input signal can be exploited either as an envelope generator (Env) or trigger (Trig), the second enabling the ducking of the wet signal (including feedback) by the input for which the original unit was partly known, when assigned to Dyn. Modulating Dyn with the Env source, on the other hand, compresses the wet signal without affecting the feedback. The Speed parameter determines the Env/Trig attack time.

Modulation of panning (for which stereo signals are first summed to mono) can be applied to the input, wet signal or both, while the Reverse Dynamics button turns compression into expansion and ducking into gating.

In terms of the delay effect itself, TC2290-DT is a flawless emulation of the real thing, with all its characteristic warmth and fluidity, and endless potential for both echo treatments and delay time modulation-based effects, as well as tremolo, the all-important ducking, weird gating and more. It’s a fabulous plugin.

Sadly, though, the controller brings with it a couple of major issues. First, the buttons. While they’re great for precise adjustments, they’re far from ideal when you want to quickly sweep, say, the feedback from 0 to 99, for which a knob would be vastly preferable. This particular design decision impacts on the delay time, feedback, dry/wet mix, and modulation speed and depth, all of which are more of a chore to tweak than they should be because of it. It’s one archaic aspect of the 2290 that, in a world where knob-based DAW controllers are the norm, really didn’t need to be preserved. Indeed, it frequently made us wish we could just access everything onscreen using the mouse - but that, of course, simply isn’t an option.

Which brings us to the second problem: having to have the controller connected to edit the plugin is absurd. We might not want to have to carry an extra piece of hardware around just to be able to use one particular native plugin on the go, but it seems that TC have prioritised copy protection over freedom of mobility. We’d like to see the plugin extended to include all parameters, and conventional copy protection added, so that the controller becomes optional.

No doubt about it, the plugin sounds the part and the original concept 2290 holds up very well today. It’s just a huge shame TC have made it so frustrating to work with, in the name of wilful nostalgia and piracy prevention.