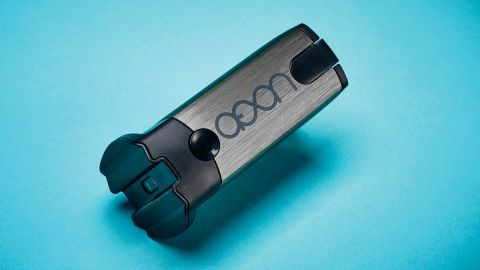 With the Aeon, TC Electronic has created a worthy challenger to the EBow that delivers on sound, build and price.

Since the EBow sustainer was invented in 1976 there’s been relatively little else in that infinite-sustain space, with the Fernandes Sustainer pickup being probably the most notable until now.

Finally, TC Electronic has decided to have a crack at the venerable guitar sustainer - and the Aeon is  the result.

The Aeon is billed as having more powerful transducers and a deeper groove for string clearance as well as a more ergonomic shape. The Aeon is certainly a looker - the brushed aluminium chassis is classy yet rugged, which is going to be useful since a hand-held sustainer is likely to get dropped a lot.

In terms of the ergonomics, we found that the more rectangular form factor is perhaps less intuitive in terms of swelling in notes and less comfortable when holding the device for longer periods.

However, the deeper cut on the underside is felt, and there’s less of the ‘buzz’ that typically happens with an EBow as the strings hit the underside of the unit. The core tone is excellent, and particularly on the G and D strings with the unit above the neck pickup, the legato sustain sounds are to die for. Our only gripe was that we couldn’t get it to clearly sound on the top E, but perhaps with a higher action this would be less of an issue.

Hand-held guitar sustainers are a relatively simple piece of kit, and it’s a surprise to us that it’s taken this long for another company to come in and challenge the EBow sustainer. The TC offering is certainly an affordable and sturdy option that, most importantly, sounds great.