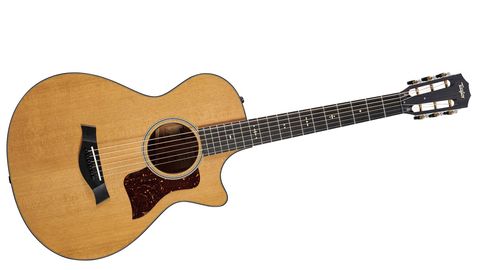 V-Class replaces the more established X-bracing pattern that has been standard for generations and is said to increase sustain and improve intonation. We’ve looked at a few V-Class Taylors in the past and found them to be sweetly voiced and characterful, and so expectations are high for the model in front of us here.

The Grand Concert body shape is smaller; Taylor comments that it represents the perfect dimensions for “players of smaller stature as well as those who simply prefer an intimate guitar-playing experience”, and that the addition of the V-Class bracing makes for “a fuller, more robust sound from a compact frame, one that at once makes these guitars more versatile while enhancing the core tonal benefits of the Grand Concert shape”.

The 512ce is a cedar-topped 12-fretter with a slotted headstock.It’s always difficult for we scribes to transmit dimensions in these reviews; in many ways, numbers mean very little. We could say, for instance, that the body of this Grand Concerts checks in at 381mm (15 inches) max width but that doesn’t convey much unless you happen to have a tape measure to hand. Suffice to say that we think this body size is supremely manageable and pegs in some halfway between a parlour and a jumbo. Small but perfectly formed, in other words. Glad we sorted that one out.

The 512’s body comprises a cedar and mahogany combo - the former renowned for its warmth and roundness of tone, the latter one of the royal family of tonewoods that produces a robust midrange with plenty of punch in the volume stakes. There’s something about cedar tops... The body shape is topped off with a graceful Venetian cutaway to facilitate those occasional trips up the neck - something that might come in handy here in view of the 512’s 12th-fret neck and body junction.

Moving on to the neck itself, the tried and trusted pairing of mahogany and ebony works its magic hereabouts, with 18 medium-chunky frets and Taylor’s ‘Century’ inlays rampant. The back of the neck has a satin finish that’s decidedly nice to the touch with a slightly vintage feel to it, too. The slotted headstock plays its part in giving the guitar that classical look. Stand back and look at the medley of cedar, ebony and slot headstock and you realise that so much has been borrowed from the classical instrument. It looks refined.

The immediate effect here is one of instant appeal. It has a maturity to its tone that contradicts its straight-out-of-the-box status. Again, we check the scale length because the 12th-fret body join deceives the eye into thinking this guitar must be short scale, but it’s the exact same 632mm (24.8 inches) as its neighbour. It feels like a short scale neck, though, all the same. Tonally, you really can’t go wrong with cedar and mahogany. Chords are rich, single notes clear and bell-like, and we found its come hither charms practically irresistible. It’s a little powerhouse, too. Don’t let the slightly smaller body size fool you into thinking that you’re not going to get much in the way of volume out of it. It has a perfectly respectable set of lungs, alongside the sweetest of voices.

Plugged in, Taylor’s Expression System 2 pickup and preamp combo steps up to the mark in providing a sensible amount of control over the sound via the three rotaries squirrelled away on the upper bouts. We found we could leave the treble and bass controls flat, but in order to bring both guitars to the same electronic output it was necessary to boost the volume on the 512 a tad.

We haven’t paid an awful lot of attention to the V-Class bracing and the enhancements it brings to the table. The reasoning here is that it’s simply no longer necessary to do so, because it has established itself as being something of a thoroughbred idea in the stable of Taylor acoustics.