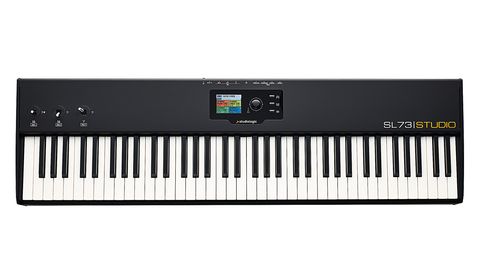 If you’re after a very solid, capable and reliable weighted controller at a price that won’t break the bank, the Sl73 delivers.

Fatar make keybeds for many well known manufacturers, but it also has its own well-established brand, Studiologic, which makes well respected products including the Numa Organ, Numa Compact and the Sledge synth (a collaboration with Waldorf).

The SL73 Studio is a very sleek-looking, sturdily built machine which feels very durable in its dark painted metal case. It’s also fairly portable for a hammer-action, 73-note controller, weighing in at 11.5kg/25lbs; though that weight will go up considerably once you case it up (if you choose to gig with it).

The keybed is based on Fatar’s own triple-sensor TP/100LR (with aftertouch) which can be found in boards made by Nord, Dexibell, Arturia and Kurzweil and it’s designed to offer piano-like expressivity with good portability for those who want to transport their controller easily to gigs, but not sacrifice a decent piano action in the process. Certainly, for those who like their actions piano-like and heavy, the SL73 delivers, but on the flipside, overall we found it to be too heavy, requiring too much initial pressure to get sound out and too sluggish on its bounce back for our lighter style of playing, (despite the intimately editable velocity curves via the editor). Of course, this comes down to personal preference but if you are wanting an all-rounder weighted keybed that’s fast enough for detailed, super-fast synth lines and you tend to play with a lighter touch, then it’s likely this is not the board for you (despite its admittedly very reasonable price tag).

Having said this, we would angle this criticism at many weighted actions these days - compare most to a real piano action and they are just too heavy, sluggish and not responsive enough, so our call goes out to all the keybed manufacturers to make their weighted actions faster on the bounce back and less heavy on the wrists!

Control-wise there are three stick controllers, each with an assignable X/Y axis assigned via the colour screen and cursor-stick system. Stick 1 is sprung vertically and horizontally (ideal for pitch-bend), Stick 2 is free vertically/sprung horizontally and Stick 3 is unsprung in all directions so that you can leave the settings at any value you let go of the stick at. These sticks work well, though they aren’t cushioned (which results in acoustic noise) and we miss a standard set of pitch and mod wheels. Also a ribbon strip and a few sliders with momentary switches would have been a good addition. There’s also a lot of unused panel space, but this can be useful for placing other bits of gear. There are also four keyboard/MIDI zones, which can be assigned to the separate MIDI outs (along with the sticks) and controller groups, which can be applied to songs or projects, with plenty of foot control options, and USB and DIN MIDI connections.

This is a solid, portable and capable but heavy-feeling controller at a very good price. Worth trying.