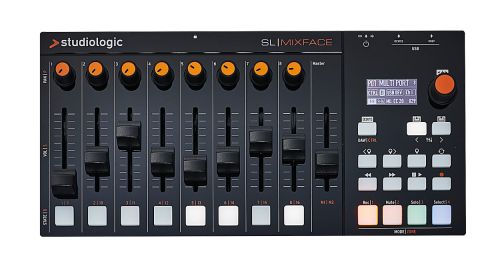 A very compact yet well-equipped controller that integrates with either a regular USB keyboard or Studiologic controller.

Italian company Studiologic has a long history of making keyboards and keyboard controllers both under its own name (originally Fatar) and for others.

SL Mixface marks a move into the DAW controller realm and is designed to work standalone unit or in tandem with a MIDI keyboard.

The Mixface is pretty small, but at over half a kilo is weighty enough to show it means business. Its rubberised buttons have a solid feel and click, and the manual faders although pretty short feel sturdy enough. The unit incorporates a foldaway table top stand so you can angle it. There’s also a skinny rubber slip mat and a magnetic strip on the underside, providing further options for mounting and positioning. It can be powered either via USB or battery, and the rear on/off switch doubles as the power source selector. Connection to your computer is via micro USB and Bluetooth 4.2 is also included, allowing MIDI over Bluetooth with other suitably capable devices. There’s a further type A USB socket for the Host USB feature (see below).

Mixface works in two distinct modes, DAW and Controller (CTRL), and both use the nine manual faders, eight knobs and eight backlit buttons. Functionality is distinguished by white (DAW) and orange (CTRL) labelling and you can quickly switch between modes using the Edit button just below the small OLED display. In DAW mode the sliders and knobs handle channel volume and pan, while the button’s function (Rec, Solo, Mute and channel Select) is chosen using four further backlit buttons over on the right. Above these are dedicated transport, marker and bank buttons. At the top, a push button rotary data encoder sits alongside the display.

Mixface includes DAW presets (selected in the Global settings page) for the major players (Logic/ GarageBand, Pro Tools, Ableton Live, Studio One, Reason, Digital Performer and Cubase/Nuendo). A couple of these (Logic and Reason) require an additional setup app, but of the two DAWs I tried (Logic and Studio One), DAW control was easy to set up and functionally consistent. I found the Controller (CTRL) setup was also straightforward, although it is potentially more complex for a number of reasons. At its simplest you have two banks (labelled 1-8 and 9-16) of assignable controls (so 50 in total). But you also have four zones selected via the coloured buttons on the right. Zone options include editable keyspan, MIDI channel and also destination USB port. This lets you specify different destinations (Bluetooth MIDI for example) for specific zones, which is a nice touch.

So, any major gripes? The small display does take a bit of getting used to, and although we like the colour-coded Zone buttons, it would be great to see coloured backlit buttons in DAW mode and on the channels. But these points aside, Studiologic has done a good job here.