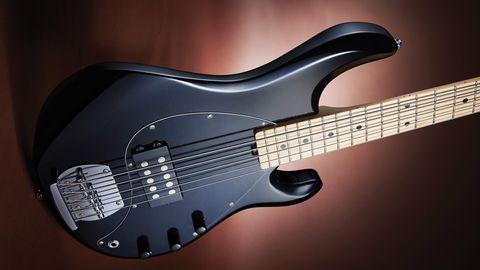 The Sterling By Music Man range has been on the market for some time and has cultivated something of a niche for itself.

Apparently many bassists are happy to forego the finer details of the full-price instruments for a bass that carries many of the hallmarks associated with the brand, at a price that won’t empty their wallets.

With a Music Man available for all tastes and at all price points, we thought it prudent to cast an eye over one of the latest affordable offerings to see if the bar was still being reached.

Have no fear, if build quality and product robustness are high on your list of requirements. This bass continues in the fine tradition of Music Man as a robust, sturdy, thoroughly well-constructed instrument.

The familiar rounded curves of the gloss-coated basswood body are complemented by the comfortable front and rear contouring and extended cutaways for unhindered upper fret access. The three-ply black scratchplate maintains an air of simplicity, while the black body and maple fingerboard are a classic combination, whichever way you look at it.

The rounded D neck profile will appeal to bassists who like to dig in with their playing. The 16mm string spacing at the bridge offsets the fullness of the neck dimensions, and although some players may find the spacing at the nut a little tight, this is easily adjusted to.

The satin-finished maple neck is very playable indeed with no sharp fret ends in evidence, and overall the setup is extremely pleasing. Black position markers have been used on the front and side of the neck, while a standard plastic nut has been incorporated along with the ever-helpful truss rod adjuster at the base of the neck.

Although there is a noticeable headstock bias, the bass sits perfectly against the player’s body on a strap. Chrome hardware has been used for the elephant ear tuners and standard fixed bridge, while the control set of volume, bass and treble (both centre-detented for cut/boost operation) are black.

A front mounted jack socket - instead of the more customary, and contemporary, side mounted socket - completes the control plate layout.

The crash, bang, wallop of a Stingray in full flight is one of the most recognisable bass displays imaginable, and we’re happy to report that this bass is able to re-create many of those signature tones. The thunderous bottom end is clearly evident and although there is no midrange EQ, this bass performs adequately enough without it.

With both EQ controls set flat, you’re presented with a perfectly usable rounded tone; it’s not especially sparkling, but there’s no lack of definition.

Finger placement over and around the pickup has a significant effect on your playing tone, so experiment a little and hear for yourself how the tone changes. Try different playing styles, because the effect of pick attack, warmer fingerstyle and percussive techniques all have a marked effect on the tone.

Once you’ve accustomed yourself with these, start cutting and boosting the EQ. With such a simple control layout, you’ll quickly learn your way around this bass - and with plenty of brute force on tap, you may find cutting rather than boosting either EQ beneficial.

At this price, you almost feel that this bass doesn’t deserve to be this good. String-to-string volume is impressively consistent, and the low B string puts in an admirable display, although the lack of mid EQ restricts its potency. Still, if you want a pocket-friendly five-string with plenty of grunt where it counts, look no further.

What this bass lacks in finesse, it more than makes up for in performance. It’s very much a player’s bass that will appeal to a broad spectrum of bassists. It also appears to be more than capable of handling the strains of constant playing and transport.

At just under £400, you can afford to be less precious about it than you would be about a £2000-plus Stingray 5: it’s seriously great value for money and puts some higher-priced fives to shame.