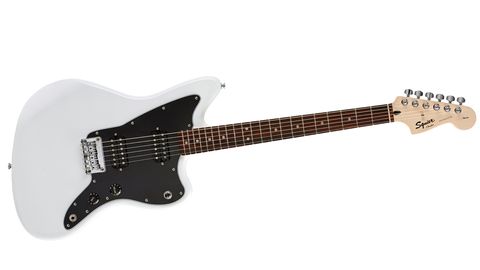 Great sounds at a tiny price.

Okay so the Squier Affinity Series Jazzmaster looks like a Jazzmaster in profile.

The body shape is unmistakable, iconic - y’know, weird to the point that, in an alternate reality, it’s a much-loved coffee table in some avant-garde Californian condo. And the big ol’ paddle of its ’68 Stratocaster headstock is pure CBS-era Fender, when the then-owners felt it necessary to upscale the dimensions to make room for a bigger logo.

So far, so very Jazzmaster-y. But the Squier Affinity Series is unafraid to play fast and loose with the Jazzmaster’s spec and brief when it’s called for, and it’s aware that it wasn’t jazz-playing sophisticates that made the Jazzmaster famous in the first place.

This here’s a Jazzmaster that’s been stripped down and bulked up to ready it for the hurly-burly of hard rock, hard blues, hard anything. Gone is the fuss of the vibrato and in its place is a six-saddle hardtail bridge that’s nice, neat and super-steady, a design switcharoo that’s a little like taping up your windows before a storm.

The classic Jazzmaster switching system - which was always a bit like offering a secret handshake anyway - and the rhythm and lead tone circuit is gone, too, both victim of this newfound pragmatism. In its place is a conventional pair of master pots for volume and tone, and a three-way blade pickup selector.

And about those pickups: anyone tuning in for the warm, mellow and organic tone of the Jazzmaster’s single-coil soapbars will get a shock to find two relatively hot humbuckers in the bridge and neck. This battle-ready Jazzmaster don’t surf.

Has there been a more misnamed guitar than the Jazzmaster? Introduced at NAMM in 1958, it was hoped that the Jazzmaster would prove a revolutionary alternative to conventional archtop jazzers. As it transpired, the artists who played them turned out to be the trailblazers. In the 60s, likes The Surfaris and The Ventures hijacked the Jazzmaster for the rolling skronk and twang of surf rock. A decade later, the Jazzmaster found its oddball body in the hands of Elvis Costello, and Tom Verlaine and Jimmy Rip of alt-rock pioneers, Television. Its niche was among the mavericks - Sonic Youth’s Thurston Moore et al and of course, J Mascis: founder of Dinosaur Jr. And if that wasn’t far away enough from planet jazzer, Slipknot’s Jim Root uses one, too - albeit a weaponised signature model that’s tooled up for metal.

There’s no doubting the thinking behind this. Squier is offering an electric with some Jazzmaster mojo and feel while reining in its eccentricity, and, as is their mission as Fender’s affordable diffusion brand, they do so to appeal to the widest demographic of players. The brand did something similar with the now-discontinued Jagmaster, which featured a vibrato and a pair of Duncan Designed humbuckers, but, as the name suggests, that came somewhere between a Jazzmaster and a Fender Jaguar.

The Affinity Series Jazzmaster is a winner because it’s so playable; it is a whole lot of fun, and certainly doesn’t play like a guitar that’d give you change from £200. Across the board, Squier’s Affinity Series is a little more generously spec’d than the entry-level Bullet Series, a little less than the Deluxe Series, and retails for around £195.

Featuring a one-piece, bolted-on maple neck that’s satin-smooth and cut into a svelte C-profile, the Affinity Series Jazzmaster is quick, guaranteed not to gum up on your sweaty fretting hand, and extremely forgiving. Guitarists who have just started their journey with their instrument will find it accommodating and encouraging.

That asymmetrical, offset body is not just visual iconoclasm either; it’s cut to make the guitar sit comfortably when playing seated, and makes good on that promise. It also sounds the part. Seated in an alder body, the humbuckers are hot, but they’re not so over-bearing that they lose the snap and tightness of a classic Fender tone. Again, it’s not quite classic Jazzmaster tone and not nearly so versatile - but for an all-purpose rocker, you could do a lot worse at this price.

The Affinity Series Jazzmaster is well served by a tone control with plenty of range. With a clean sound, rolling that tone back unveils a nasal woodiness that just about keeps the Jazzmaster true to its name, and there’s a lovely articulation to busy, note-heavy phrases. With the tone up full there’s a huge amount of brightness, that authoritative snap we love from Fender instruments without it ever being shrill. It’s brilliant for some fingerpicking blues, for double-stops and chicken pickin’. As you dial in more gain, the Affinity Series Jazzmaster responds with a nice dynamic crunch that should cater for any and all of your vintage hard rock needs.

When you crank the gain up further, you’ll find a high-gain sweet spot somewhere between Iron Maiden bark and Seattle grunge. And that confirms suspicions that this Jazzmaster is more Crazy Train than Blue Train - but that’s okay by us.