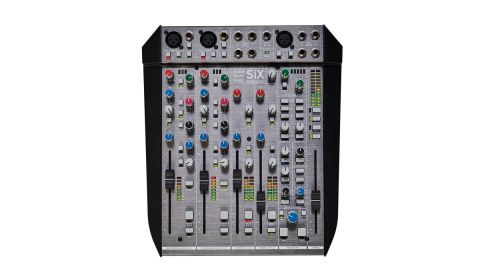 A flexible, compact all- analogue mixer with premium electronics, classic SSL processing and just enough to justify that price.

Despite having a history rooted in large format music and broadcast gear, SSL’s X-Desk showed that it could appeal to the  little guy too.

Its latest unit, simply called ‘SiX’, is its most affordable and compact desk to date. Incorporating SSL’s highly respected SuperAnalogue circuitry, SiX is a totally analogue mixer with a feature set aimed at desktop producers, podcasters, small scale post production and live use. SiX has a pretty unique feature set for a compact mixer.

It’s a six-channel design using four 100mm faders with a fifth fader for the main output. There are two mono channels with mic/line/ instrument options and a pair of stereo channels with line-level inputs. The mono channels (1 and 2) include a high pass filter, gain, simplified E Series style two-band EQ, a newly-designed (though E Series inspired) program-dependent compressor, two stereo cue sends and insert point. The simpler stereo channels (3,4 and 5,6) meanwhile get line trim and the two stereo cue sends. All channels have pre fade listen (PFL) and mute buttons, and the latter simultaneously route the signal to a second stereo bus B.

The SiX’s processing is basic but well conceived. The EQ delivers gentle sweetening in the shelving setting, with the bell option (at 200Hz and 5kHz) better suited to adjusting mic proximity and presence on a vocal. The one knob channel compressor we found surprisingly snappy and with auto gain make up very easy to use. The mix bus compressor has fixed settings that are ideal for delivering that all important mix glue.

SiX includes both onboard headphones and two foldbacks designed for sending to external headphone amps. With the right cable you could easily plug phones directly into the foldback outputs as there’s plenty of adjustable gain available at the foldback controls. Other flexibility comes in the form of the main bus where you can add in the aforementioned external sources. Including the channel strips, SiX can blend 12 channels to the mix bus making it a decent summing device.

As desks go it feels quite busy, but every button and meter serves a purpose or even two, and being able to switch features in and out will appeal to audiophiles. In use, the SiX is super quiet with oodles of headroom and bandwidth to match, and like all the best analogue gear also gets a bit toasty when on a while.

Part of us would love to see a 2 in/2 out interface here, and an integrated talkback mic and phase invert on mic inputs. This aside, though, this is a truly awesome little desk that ticks so many boxes for all manner of users.