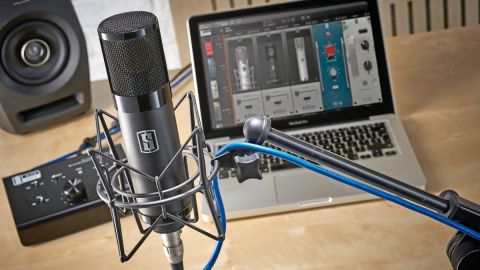 This is a great system which really does give you the character of classic vintage microphones at a price that won’t make you faint.

Classic large capsule condenser microphones are without a doubt amongst the most sought-after and expensive items on anyone’s wish list.

With an original Neumann U47 commanding up to $10,000, most of these mics are out of reach for the average studio owner, and certainly only possible for a tiny minority of home studios. So in theory, if you can emulate them with software then you should be on to a winner.

There have been a few plugs over the years which have claimed to give one mic the character of another but, given the limitations of the original mic, coupled with any number of mic pres that could have been used, plus the quality of the interface that recorded it, most of them have been pretty disappointing.

Slate Digital have taken that idea and built a complete system which removes as many of those variables as possible. What you get with the VMS is a high-quality, large capsule condenser mic, a dedicated ‘ultra linear’ mic pre and a plug-in which contains the modelled mics. The only variable is that you have to use your own A/D converter to get it into your DAW.

So, given that you have an A/D of reasonable quality, you should be able to get the results that Slate intend. For the purposes of this review we have used a Prism Atlas, so quality of conversion is not an issue.

As we looked down the list of models provided we realised that these are vintage mics all of which we have used many times over the years. While every U47, U67, C12 and so on, has a distinctive character, they are all different - some quite radically (you’d be surprised at how many we have come across that were simply broken and still being used!) and some very close.

Obviously, Slate knows its mics so it has modelled great sounding ones but it’s really the overall characters we are commenting on in this review as those variations do make a difference. We, like most professional engineers, have particular favourites that we will go to when we open the mic cupboard door, and even have a list of serial numbers so that when we book a studio we ask for a specific mic for a specific purpose.

While it will never be possible to get that nuanced with a system like this we can imagine Slate being able to extrapolate this idea into picking multiple examples of the same mic and making those available. When a system is as capable of fine detail as the VMS it would seem like a natural progression, and one that we would certainly welcome.

Starting with the microphone itself this all black affair is, in shape and size, somewhere between an AKG C12 and a Brauner VM1. It comes with a very well made suspension mount which it screws into (that always feels better to me than mounts with clips) but we think it could be a tiny bit slacker as there is still a higher degree of transmission noise than we would expect.

The microphone connects to the preamp via a standard 3-pin XLR cable. The Pre is a compact unit which has a dual XLR/1/4-inch jack input and can be switched between instrument and mic. There are switches for phantom power, phase and a pad and a single large level control. The external power supply connects via an XLR and there are XLR and TRS Audio outputs.

As far as metering is concerned there is a ‘level’ LED but we can’t help thinking it might have been better to have something a little more sophisticated as it is always good to know how hard you are hitting a pre. For many applications the pre could be kept close to the mic keeping the longer cable runs at line level and thus less subject to noise, and in that instance a bit more level indication would be handy.

On the subject of build quality both the mic and the pre are constructed to a very high standard, metalwork and finish are excellent and, unlike on some expensive modern mics, the suspension mount is smooth to adjust and holds firm without having to have a grip like a vice.

The software comes as part of the Slate Virtual Mix Rack and is very straightforward. It displays which mic it is on until you press the MICS button at which point you get the list of eight current models (there will be more) to choose from. These are the FG-47 (the infamous U47), FG-800 and 800G (after the big Sony), FG-251 (Telefunken), FG-67 (Neumann), FG-12 (AKG), FG-M7 (Shure, beloved of Michael Jackson), and the FG-269 (Neumann). The only other control on this module is the Character slider. This goes from 100% to 150% and gives you the option of dialling in a bit more of the inherent character of each mic and even with extreme settings it doesn’t sound like too much, just more.

Of the software that comes with the microphone you also get two modelled pres, these being the FG-73 (Neve 1073), and the FG-76 (based on a valve Telefunken). In order to get the sound that Slate intends, you then need to go through one of these.

They are both very good and sonically most certainly do what we would expect of the hardware units, but we particularly loved the 76. It has a warmth and clarity that we have always loved. The 73 has that fatness we always associate with the Neve, making it perfect when you want to add more depth, especially on a thinner voice or low-end instruments like bass and bass drum.

You can push both the pres right up to distortion and there is a broad range of usable tones just from them. Of course, if you have other Slate licences you can pull in different EQs and compressors to build up a chain - very useful if you regularly record the same instruments and voices as you can have a library of recording chains and go straight to them when you want to keep the creative flow going.

The single issue we have with the system so far is that there is no high-pass filter in sight. Personally we prefer to see one of these in the preamp stage as it’s always good to deal with ultra low-end issues before you go through too many electronics, even virtual ones.

So, it’s simple and straightforward to set up making the big question what does it sound like?

We tried it on vocals, guitars, double bass and percussion. The mic and pre are quiet and super clean. As an experiment we did try the mic through some different pres, a valve EQ and compression without using any modelling and the results were very good. It’s a high-quality mic and, although without some help it sounds a bit sterile, you may well find that for certain moments that is exactly what you want.

The ‘sterility’ is exactly what we expected as you are supposed to add the character later, but it is certainly another positive aspect to the system as a whole, and it hasn’t harmed companies like DPA.

Going straight into the software and flicking between the mic models opens up a whole new world. Starting with vocals, as we switched between them the characters were very distinct and entirely in keeping with what we expected.

Particularly fine on male voice are the 67, the 47 and the 269, although it’s really program dependant. If you are looking for a sparkly Pop high-end on a female voice the 800 models and the FG-12 will certainly get you there. On acoustic guitar the FG-12 and the FG-251 really shone. Sweet highs with real depth. Double bass sounds great with the classic 47 or 67 and pretty much everything for percussion as there are so many differing high-end colours.

And that is the beauty of it. Those subtle differences are perhaps less obvious out of the track but once you start to add EQ and compression and blend the sound into the mix they make all the difference. And of course as you are recording the original signal flat and doing all the work on the back end, if you should find you want to change things later you can, without having to try and undo work you already did.

It’s very often the case that recording gets done during the writing process these days and so it is harder to judge the exact sound you want as the track around it may change quite radically as you go through the process.

The VMS is fixed cardioid so, while you may not have the flexibility of an omni or figure of eight, it is a very useful microphone to try on ambient sources too. In fact distant mic’ing of a source often shows up the inherent qualities of microphones in a more obvious way than close mic’ing. Those character changes again followed my expectations with no obvious surprises and a pair of them would be a very interesting proposition for drum ambience, choir or quartet.

If you are looking to make your first serious mic purchase this has to be a major contender. Aside from the M7, the Slate is probably one third of the price of the cheapest of these vintage beauties, will certainly require far less maintenance, and you currently get eight distinct characters with more to come. For many educational establishments this could be a wonderful teaching tool too, as it’s one thing to discuss the relative merits of all these microphones, but another to actually hear what the differences are.

This is a very well thought through system; from design to delivery Slate Digital has considered every aspect of how to make this work and it has succeeded. When you look at what you get for the price - the microphone, a  mic pre that can be used on any mic and as a DI, plus those great sounding models - it has to seen as a bargain.