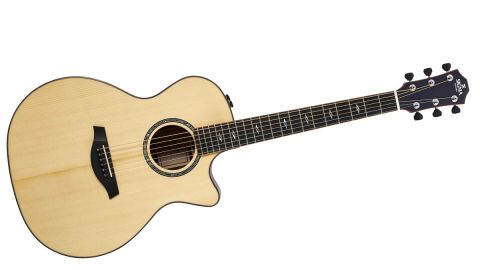 A well-finished, highly playable and very likeable modern electro that makes use of ebony for a clear voice.

There can be a fine line between being stuck in the past and merely accepting that certain things just work well together.

But 2017’s CITES regulations strictly controlling the global import and export of all species of rosewood have raised some interesting questions. As makers have scrambled to diversify the woods  they use out of absolute necessity, players have been forced to examine their own tastes and prejudices. Do we see the use of non-standard tonewoods in a post-CITES market as a compromise? Or is this new tonal diversity an exciting opportunity?

Now Sigma has arrived right on cue with its new Modern Series, which break with its own conventions while bringing some fresh wood combinations into the marketplace. Originally an affordable offshoot brand owned by Martin in the 1970s, its current German owners are AMI Musical Instruments GmbH. Sigma’s familiar Martin-esque shapes have remained in the range under AMI, but Sigma’s recent models have also branched out into all-new designs and upwards into higher price points.

With all that in mind, the Modern Series introduces cutaway models, currently ranging from the spruce/mahogany GMCE-1+ to the UK-exclusive all-koa GK2CE-4+, with further expansion of the range already planned. Many of these models feature laminate backs and sides with a new Fishman OEM system for Sigma guitars, the Flex Plus.

The woods used across the range make for impressive reading too: Macassar ebony, tilia, Australian blackwood, koa, ziricote, walnut, Alpine spruce... These less- familiar woods represent a comprehensive change for Sigma, bringing novelty and stimulating variety to these new models. On paper at least, it’s very exciting. But how does that manifest in play? Today, we’re focusing on the GECE-3+.

Like the Hummingbird curves of the DM-SG5+ we tested recently, this model is a clear departure from Sigma’s past links with Martin’s iconic shapes that are still a draw for players to this day. There’s a confident Taylor-esque modernity to these Grand OM cutaways in their high-gloss, ultra-thin UV-finished tops, backs, sides and satin necks. Even the three Fishman control knobs on the upper bout edge echo the low-key design of the Expression System.

Nearer the knuckle still are the element-style inlays, whose general outline will be familiar to anyone who has played Taylor’s flagship 800 Grand Auditorium 814CE. The abalone rosette design is also highly similar to Taylor’s. It’s ambitious territory to venture upon, but the finish standard here is highly creditable at this price point, especially on the GECE-3+ Macassar.

Sigma doesn’t actually go into any detail regarding the tonal character of Macassar ebony but it is favoured by another well-known maker for its custom builds and limited editions: surprise, surprise it’s Taylor once again. It describes the wood as “clear and loud with broad dynamic range”. On this Sigma, it offers deep, dark flame that contrasts effectively with the blanched hue of the solid Alpine spruce top.

The ebony and spruce make for a lively tonality; punchy and responsive leading us to flatpicking territory for a highly enjoyable performance. And we have to say we like this neck: the satin texture of the mahogany makes a tactile match with the low action that is pleasing under the fingers.

Our final verdict is settled by the electro experience. The ‘Plus’ iteration of Fishman’s Flex system offered on this guitar uses the same Sonicore piezo pickup as the Sonitone preamp system but with bass and treble alongside a volume control. The plugged-in performance does this guitar proud here, and we’re able to test the EQ controls without finding any unpleasant brittle territory.

But there is no gigbag included - which matters for guitars designed for stage as well as home. This guitar makes it clear, though, that Sigma is now drawing inspiration from far beyond its old owner. And the tones we encountered here suggest exciting potential for the rest of Modern Series range.