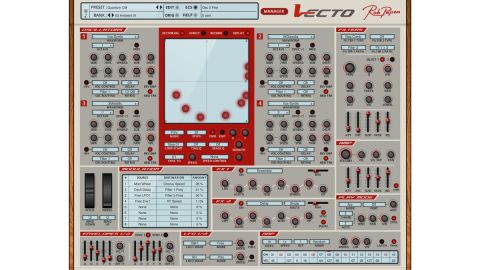 Originally released only as a Rack Extension for Propellerhead’s Reason DAW in 2015, Rob Papen’s latest plugin instrument (VST/AU/AAX), Vecto, employs a method of sound generation that doesn’t come around too often these days: vector synthesis.

This powerful technique was pioneered by Sequential Circuits with the Prophet VS in 1986, and followed up most famously by Korg with the legendary Wavestation shortly after. Quite simply, it centres on manual control and modulation of the output blend of multiple oscillators using a joystick or similar controller. The complex, shifting tones of vector synthesis are well suited to sustained sounds - pads, strings and the like - and particularly favoured by cinematic sound designers and ambient producers.

Packed into a tidy but busy single-window interface, Vecto is a four-oscillator polyphonic synth, with the oscillator mix governed by the XY pad - see Vector director - unless it’s turned off, in which case the individual oscillators are balanced in the conventional manner, using their Volume controls.

Like other Rob Papen synths, a huge variety of waveforms are available for every oscillator, in categories comprising Analogue (Sine, Square, Triangle, SineRez, Noise, etc), Additive (Glass, Organ, Vocal, etc), Spectral, and seven Samples menus including Big Samples, Tuned Percussive Samples and FX Samples. The usual oscillator tuning controls are in place, as is a Sub knob that dials in a square wave in one direction and a sine in the other, an octave below the main oscillator.

The Analogue, Additive and Spectral waves can also be manipulated using a number of further parameters. Spread applies unison-style thickening by adding offset oscillators above and below the main frequency; and Symmetry Modulation is Vecto’s name for pulse width modulation, controlled by the Symmetry (pulse width), Speed (LFO rate, described as a percentage, for some reason, but topping out at around 30Hz) and SMA (mod depth) knobs. Oscillators 2, 3 and 4 can be synced to Oscillator 1, and a menu built into each oscillator enables convenient selection (and, optionally, inversion) of one of a range of volume modulation sources.

Although essentially the same in design as its modulation-generating equivalents on other Papen synths, the XY pad at the heart of Vecto is where the actual ‘vector’ part of vector synthesis takes place.

The red dot serves as the virtual ‘joystick’ via which the four oscillators positioned on each corner of its containing square are intuitively blended. The red dot can be dragged around with the mouse and assigned as a modulation target in the matrix for automated movement. The XY pad’s killer feature, though, is the ability to record and play back manual movement of the red dot as a path defined by up to 32 editable breakpoints.

The path can be looped from any breakpoint; played back monophonically (restarting with each new note), polyphonically (each note has its own red dot) or free (note input doesn’t restart the path); sped up and slowed down (with modulation of the Speed control) by a factor of up to 16; synced to host tempo; and quantised in terms of both timing and breakpoint positions on an underlying grid. A useful menu of editing functions (Set to circle, Rotate, Reverse, etc) facilitates instant transformation of the path, and the XY pad is also available as a general modulation source, of course.

You can delay the onset of each oscillator after triggering, too, in note values from 1/32 to 16/1, making it possible to program short rhythmic patterns around them. Output routing options for every oscillator include the filters, the FX and any other oscillator, the last for FM (frequency modulation); and the sampled waveforms can be reversed and set to retrigger repeatedly at any of the above note values.

Papen isn’t one to skimp on filters, and Vecto has two, drawing on a broad array of types and slopes, from low- and high-pass, through band- pass and notch, to Vocal, Comb and Formant, at roll-off slopes from 6-36dB/octave. They can be routed in series or parallel, pre or post FX, and their dedicated ADSR filter envelopes feature a Fade control for turning the sustain stage into a second attack or decay segment. The Amp and Free envelopes also incorporate this.

With eight assignment slots in its modulation matrix, Vecto provides a decent amount of parameter animation options. Alongside the expected list of MIDI streams and CCs, plus Oscillator Retrigger and Delay, White Noise and a few other oddities, the onboard modulation sources consist of two simple LFOs, four envelopes (including those of both filters), Arp Velocity (see below) and both axes of the XY Pad. All parameters are available as targets, even those of the modulators themselves and the FX controls - always good to see.

The Arpeggiator features a comprehensive menu of directions (Up, Down, Random, Chord, etc) and a 16-step sequencer, with both free running and retriggering modulation modes. Swing and Length knobs bring the groove and shaping, and the balance of programmed (in the Velocity lane) and played velocity is adjustable.

Unusually, Vecto’s two FX modules aren’t identical. Instead, FX1 handles modulation- based effects - Chorus, Ensemble, Flanger, Phaser or Widener - while FX2 hosts Delay or Reverb. As was the case with its stablemate Go2, we’re not impressed by the inability to use reverb and delay together, but other than that, it’s a decent spread of processing options, and all of them offer plenty of control and sound fantastic.

Vecto arrived in its new plugin incarnation with little fanfare, presumably because the RE version had already been around for quite a while. It’s certainly a synth still worth getting excited about, though, marrying all the Papen staples we know and love - well-stocked oscillators, superb filters, deep modulation, the recordable XY Pad, etc - to the fun and easily accessible sound design avenues opened up by vector synthesis.

Pads, ambiences and modulated sequences are its obvious fortes, but basses, leads and ‘shorter’ sounds are very much on the cards as well, as even without the vector functionality, it’s a very capable four-oscillator synth with an extensive library of waveforms ripe for exploitation. The pricetag is spot on, too, making this a solid buy for any electronic musician on the hunt for interesting new textures and colours.