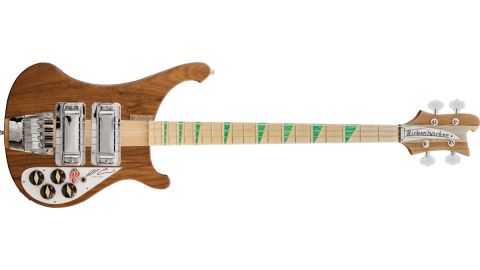 A Rickenbacker of formidable power and quite exceptional build quality, the 4003 offers traditional Ricky tones in a quietly unorthodox format.

While Cisneros' playing style is rooted in Geezer Butler et al it's very much unique, all spaced-out drones and fingerstyle chord work, and since 1989, the tool he has chosen for the job has been Rickenbacker. His first was a beige 4001 with black binding that he bought from Starving Musician, Santa Clara, and financed from his paper route.

How times have changed. Now he has his own signature model, the Al Cisneros 4003 AC, and limited to 420 units (with reference to the most important date in the dopesmoker's calender, 20th April 4/20) it's pretty special.

• Rickenbacker 4003S5
A great bass in every way, although purists might rebel.

• Rickenbacker 4003
This is an understated bass in a cool, classic way, and much of its history and mystique is still in place.

It's also custom-built with Cisneros' style in mind, with a walnut body and maple neck-through build housing two high-gain singlecoil treble pickups, complete with removable chrome bezels. There are two volume controls and two for tone, with push-pull controls on the tone knobs to activate the 4003 AC's vintage voice.

The 4003 AC has a 33.25" scale, Schaller Deluxe tuners, a newly designed bridge, a bound maple fretboard with 20 frets and green inlays. Those inlays complete a custom vibe that's evident in the control knobs. As Cisneros explained to MusicRadar in September 2019, the aesthetic flourishes were Rickenbacker's idea.

"The green inlays were their idea, and I was really happy with that," said Cisneros. "It was a salute to the first Dopesmoker bass I had custom-painted back in 1993. It’s a full circle in my journey. It’s very humbling – a real honour.”

There's no question that the 4003 AC is a big-ticket bass with a hefty price tag, but if you do manage to grab one of the 420 you'll be rewarded with an immaculate build. Truly, it's flawless – a premium US-made instrument.

In an instrument this solid, perhaps we should start at the bridge. This is, as Rickenbacker says, a new design, featuring four adjustable saddles, and while it might divide opinion online there is no question that having that control over the intonation is a plus. It's such a neat piece of engineering.

The dual treble pickups are a deviation from the stock 4003s, too, but if that seems like an unorthodox choice, Ricky purists will love the voice on this one. Leaving the tone controls flat, there's some 100 per cent Rickenbacker tone, that gritty attack rounding out to a clear, sonorous low-end thunder. Lovely.

Take some of the treble off the neck pickup and the tone rounds out, a little warmer, a little more viscous – it's a tone that responds well in the upper-registers. Having two treble pickups won't be for everyone. Cisneros plays with his thumb on the rest, right up by the neck, and with it being naturally a bit more woolly there having some treble-forward voicings help keep the bass tone tight. But there is plenty of range via the tone controls.

The neck is really something to behold. The finish is perfect, and at 42.9mm the nut width is comfortable for fingerstyle players looking to exercise their chops. Pickers or players who like to play closer to the bridge will need to remove the bezels to clear up some room, but they'll be rewarded with a sharp, percussive voice. Ultimately, this is a supremely playable instrument, well-balanced and none-too-heavy at 9lbs or so.

The 4003 AC plays very much like a hot-rodded 4003W. It's a signature instrument on many counts. First is the custom shop feel and finish, and in the quality of its components and sounds. Second is in its setup, with the thumb rest and bevels – not to mention the dual treble pickups and their positioning – all configured for Cisneros' playing style. But with a few tweaks you could make this your own. If you can raise the bread, that is.

MusicRadar verdict: A Rickenbacker of formidable power and quite exceptional build quality, the 4003 offers traditional Ricky tones in a quietly unorthodox format.